Saturday done right! Sonam and Anand begin their weekend on a peaceful note 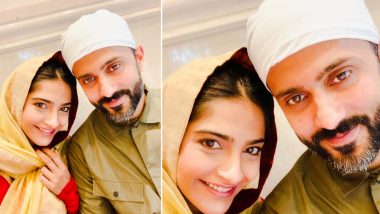 Sonam Kapoor and Anand ahuja have been redefining couple goals everytime they do something. They've been such an inspiration all this while and we really love Anand for having shown tremendous love and support to his wifey dearest whenever she's needed it. That's what makes him the Best Husband of the Millennium, except for Ranveer Singh of course! Anil Kapoor: If I Ever Direct a Film It Will Only Be So That I Get To Direct Sonam.

So, since we know that the weekend is here and it's time for most of us to chill and enjoy the weekend, lovebirds Anand Ahuja and Sonam Kapoor are off to a beautiful start. The two began their day with visiting a Gurudwara and the actress took to Instagram to share a pic with Anand. They look super cute together, with their head covered as they visit the place of worship. Sonam captioned the pic as: "ੴ, ਇੱਕ ਓਅੰਕਾਰ" which reads, "Ik Onkar" in Punjabi. Let's Take a Moment to Appreciate Sonam Kapoor's Husband Anand Ahuja For Being Such a Sweetheart to the Paparazzi.

The happiness on Sonam's face is pretty evident as she has been gaining much appreciation for her latest film, Ek Ladki Ko Dekha Toh Aisa Laga. She plats a lesbian in the movie and this is the first time, she is sharing the screen space with her daddy Anil Kapoor. Meanwhile check out the recent pic of Sonam and Anand right below-

Is it just us or do you also notice the fact that there is so much contentment, peacefulness and happiness in this pic. Sonam and Anand are both in the best phase of their personal and professional lives and we couldn't be any happier for the couple. We hope and -pray that the blessings continue to be showered upon them and that they always be happy!

(The above story first appeared on LatestLY on Feb 09, 2019 12:47 PM IST. For more news and updates on politics, world, sports, entertainment and lifestyle, log on to our website latestly.com).