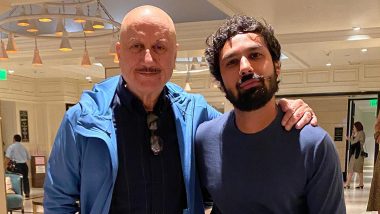 Veteran Bollywood actor Anupam Kher recently took to his social media to share a picture with The Big Bang Theory actor Kunal Nayyar. Kunal is known for playing the role of Dr Rajesh Koothrappali, an astrophysicist in The Big Bang Theory. He captioned it: "His warmth touched my heart" The Kashmir Files Twitter Row: Shashi Tharoor Responds to Vivek Agnihotri, Anupam Kher’s Digs on His Late Wife Sunanda Pushkar.

Sharing the picture, he wrote : Sharing the picture, Anupam wrote, "It was so wonderful to meet @kunalkarmanayyar. Our very own Delhi Boy. His warmth touched my heart." He also added the hashtags, #BigBangTheory #Actor #IndiansInLA." The Kashmir Files: Anupam Kher, Mithun Chakraborty’s Film Heads to Israel for Theatrical Release on April 28, 2022!

One fan commented, "It'll be fun to see you two working together." Another one wrote, "The crossover we never expected." Another wrote:"Wohoo! Rajeshhh!" many dropped heart emojis in the comments section of the picture. Kunal will be seen playing the titular role of A.J. Fikry in the upcoming comedy drama, 'The Storied Life Of A.J. Fikry' alongside Lucy Hale and Christina Hendricks. It is an adaptation of the New York Times best-selling novel by Gabrielle Zevin.

Kher recently made headlines for his role in 'The Kashmir Files'. He is also known for his several projects such as 'Daddy', 'Ram Lakhan' and his next one is 'Uunchai', directed by Sooraj Barjatya.

(The above story first appeared on LatestLY on May 28, 2022 01:47 PM IST. For more news and updates on politics, world, sports, entertainment and lifestyle, log on to our website latestly.com).