Anurag Kashyap Gets Accused of Sexual Assault by Telugu Actress, Says She Has No Proof But Wants to Make Girls Wary 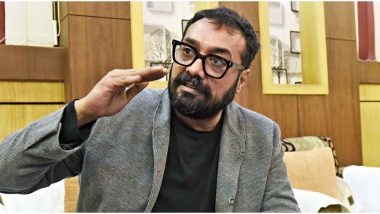 Anurag Kashyap had quite a weekend we assume. The filmmaker is the newest name to get embroiled in #MeToo allegations and the lady in question here is a Telugu actress. She recorded a video saying Anurag had behaved inappropriately with her and the same has gone viral ever since. While the director has hit back at her, denying all her claims, the actress insists she was a victim and that she decided to speak up to make other girls wary. Anurag Kashyap Reacts to Sexual Assault Allegations Against Him by Telugu Actress; Denies the Accusations While Also Taking Digs at His Detractors in Hindi (View Tweets).

In her recent interaction with E Times, when she was asked why she didn't come forward when the #MeToo movement was at its peak in India, the actress said, "I have wanted to speak about this for a long time. But today, finally I thought I must get it off my head." Revealing how she had once tweeted about the same incident, the actress said, "I had tweeted about my incident sometime ago when the MeToo movement had happened, but many people told me to delete the tweet else I would stop getting work. My manager too advised me to remove the tweet. I complied. Post that, Anurag blocked me on WhatsApp."

When asked if she has got any proof to back her claims, the actress said, "No, I don't have any of his text messages as quite some time has rolled by and I have changed more than one phone since then. Neither I had recorded what happened at his house (in the third meeting)." Anurag Kashyap Accused of Sexual Assault by Telugu Actress, Twitterati Trend #ArrestAnuragKashyap.

Narrating details of her meeting with Kashyap, she said they had met thrice and it was only during their third meeting that he tried forcing himself on her. "The first time I met him was at his office in Aram Nagar, Versova. The second time I met him was at his residence. We spoke in general about films and the film industry. Then he called me again to his house and this time, that is on the third occasion, he tried to force himself upon me. I did not raise an alarm but pleaded with him that he should let me go as I would return again some other time," she claimed.

(The above story first appeared on LatestLY on Sep 20, 2020 08:25 AM IST. For more news and updates on politics, world, sports, entertainment and lifestyle, log on to our website latestly.com).