Arshad Warsi in his recent interaction gave us an update on Rohit Shetty's upcoming sequel, Golmaal 5 and if Rajkumar Hirani's much-discussed project, Munnabhai 3 is even happening. 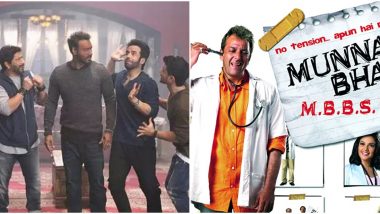 Rohit Shetty's Golmaal and Rajkumar Hirani's Munnabhai are probably Bollywood's two of the most popular franchises. And they both have a common link in Arshad Warsi. The Asur actor whose acting career gained momentum with his role as Circuit is busy wooing Bollywood with his acting capabilities since then. While he's fully involved in his multiple projects, there's always a part in his schedule that would be dedicated to Shetty and Hirani's upcoming sequels whenever they start rolling. No compromises on that whatsoever. Alia Bhatt to Join Ajay Devgn in Rohit Shetty's Golmaal 5?

Sanjay Dutt's Munnabhai 3 is in the making since forever now and there's no major update available on the front. When Arshad in his recent conversation with Mumbai Mirror was asked about the same thing, he simply said, "I know what everyone else knows. The idea is to make it, when and how is still to be figured out. I’m happy to do the film because people like it, but personally, I want to move on to new things.”

Coming to Rohit Shetty's Golmaal 5, the actor assures the next instalment would be crazier than before. "I believe they are scripting currently. It will be crazy fun. I’m waiting for a narration. The madness of the characters and the fun we have making the film is what brings people in," he said excitedly. Shah Rukh Khan To Work With Rajkumar Hirani? When The Director Thanked the Superstar in Munnabhai MBBS for This Reason!

However, with so many shootings pending, Warsi is not reluctant to admit that it will take a while for things to fall in place. And while there's no update on when films can resume shooting in B-town, let's keep praying that it happens very soon.

(The above story first appeared on LatestLY on May 14, 2020 08:43 AM IST. For more news and updates on politics, world, sports, entertainment and lifestyle, log on to our website latestly.com).