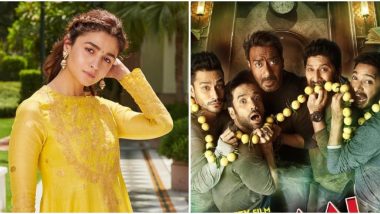 Alia Bhatt is certainly the most sought after actress in Bollywood currently and she's working with all the biggies. After Karan Johar's Takht, she has SS Rajamouli's RRR, Sanjay Leela Bhansali's Gangubai Kathiawadi and later Ayan Mukherji's Brahmastra. While this is the line-up for this year, the actress moving forward wants to sign some easy-breezy roles. The one that wouldn't include rigorous training of anything. She's apparently exhausted with her workshops and wants to sign a feel-good film for a change. Alia Bhatt Checks Out Beau Ranbir Kapoor As He Gets Clicked At Armaan Jain's Wedding Reception (Watch Video).

As per Rajeev Masand's column in the Open Magazine, Alia is tired of signing complex characters. While Takht demanded her to work on her accent, Gangubai is a taxing project in itself and Brahmastra was quite strenuous with all the action scenes. So the Dear Zindagi girl wants to sign her next project that wouldn't be demanding at all and she's actually considering an offer to sign in Rohit Shetty's next. While Golmaal 5 with Ajay Devgn and gang has been announced already, the hunt for the film's leading lady is still going on. Seems like the director has approached Ms Bhatt and she's on the verge of giving her nod to it. Golmaal 5: Here's When Ajay Devgn-Rohit Shetty's Comedy Franchise's Fifth Installment Will Go On Floors.

After Kareena Kapoor Khan and Parineeti Chopra, Alia Bhatt could be the next Golmaal girl and we all know about the fun she's gonna have on that set. Rohit Shetty's movies are high on entertainment quotient and less demanding for an actor. So guess Golmaal 5 seems to be the apt choice for the actress who's waiting for a light-hearted project next. We'll wait for the official announcement though.

(The above story first appeared on LatestLY on Feb 07, 2020 04:30 PM IST. For more news and updates on politics, world, sports, entertainment and lifestyle, log on to our website latestly.com).