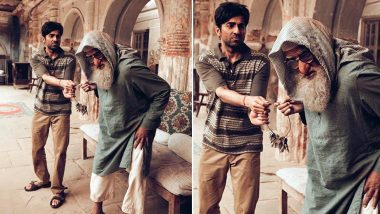 After sharing screen space with Amitabh Bachchan in the newly released 'Gulabo Sitabo', actor Ayushmann Khurrana on Friday wrote a letter admiring Bachchan. The 'Bala' actor posted a note written in Hindi on Twitter, where he recalled his first awe moment of seeing the icon in the movie 'Hum' on big screens and explained it as what drove him to become an actor. Khurrana noted that he got this "I have arrived" feeling when his first television shoot was in the same location where Bachchan's hit song 'Jumma Chumma' was shot. Amitabh Bachchan Shares a ‘Then and Now’ Post Showing What Changed From Kabhie Kabhie to Gulabo Sitabo With an Amazing Caption!

From a fanboy to acting together in the same movie now, Khurrana had no words but to express how overwhelming it is for him. From the director Shoojit Sircar, the quirky comedy sees him essaying the role of tenant Baankey, while the 'Sholay' actor plays Mirza, the landlord. The movie revolves around the character Mirza taking the legal route to evict his tenant, Baankey, from his haveli. Gulabo Sitabo: Amitabh Bachchan on What Was It like Filming in Heavy Make-Up and Prosthetics for 4–5 Hours a Day During Summer

The two use every method up their sleeve to make life hell for each other. He concluded the note by thanking the director for the wonderful opportunity and putting them both in one frame. 'Gulabo Sitabo' was released on Friday on online video streaming platform Amazon Prime Video The quirky comedy was slated to hit the screens on April 17 but could not see the light of day due to the shuttering of cinema theatres over coronavirus concerns.