Tiger Shroff joins the league of Salman Khan, Akshay Kumar, and others as Baaghi 3 scoops up five records on its first day at the box office. 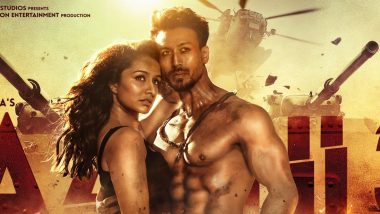 Baaghi 3 may not have witnessed the kind of occupancy the Trade had predicted but it has always managed to scoop up a few of the records. The Day 1 numbers of the film are not even out and yet it has five records in its kitty. The third installment starring Tiger Shroff and Shraddha Kapoor is directed by Ahmed Khan and takes the action to war-torn Syria. In fact, the film has already beaten the likes of Ajay Devgn's Tanhaji and his own film War from last year. Let us tell you about all of them: Baaghi 3 Movie Review: Despite the Kabooms & Shraddha Kapoor’s Censored Abuses, Tiger Shroff’s Action Film Is D…Duh…Dull!

As is obvious from the above point, this is Tiger's widest release. Baaghi 2 had opened with 3700 screens. If you include the overseas number, Baaghi 3 has 5500 screens worldwide.

The total screen count for Baaghi 3 is 5500 which means 1100 screens are attributed to overseas. That makes it Tiger's biggest overseas release in a solo hero film.

As per Trade expert Ramesh Bala, it is also the widest release for any movie in the month of March or during Holi. Last year Kesari released with 3600 screens in India.

#Widest release for a film in the franchise

4400 screens make Baaghi 3 the biggest release in the franchise. Now it remains to be seen if it manages to use this to the film's advantage in terms of box office collection.

(The above story first appeared on LatestLY on Mar 06, 2020 02:19 PM IST. For more news and updates on politics, world, sports, entertainment and lifestyle, log on to our website latestly.com).