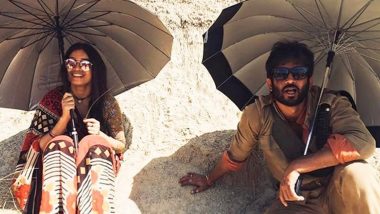 Actor Bhumi Pednekar on Monday pledged to feed over 550 impoverished families as a mark of tribute to late Bollywood actor and her 'Sonchiriya' co-star Sushant Singh Rajput. Pednekar made the announcement through an Instagram post where she shared a picture of the departed actor and penned down a note along with it. Mukesh Chhabra Remembers Late Actor Sushant Singh Rajput By Sharing Kai Po Che and PK Auditions Video.

"I pledge to feed 550 impoverished families through the Ek Saath Foundation in the memory of my dear friend. Let us show compassion and love towards everyone that is in need, now more than ever," Pednekar wrote. The two actors shared screen space in the Abhishek Chaubey directorial which continues to be a critically acclaimed film. Nana Patekar Reaches Patna to Meet Late Actor Sushant Singh Rajput’s Family (View Pics)

Rajput was found dead at his Mumbai's Bandra residence earlier this month. The detailed post-mortem report has also confirmed that he died by "asphyxia due to hanging."