Directed by Varun V Sharma, Bunty Aur Babli 2 is produced by Aditya Chopra under the banner of Yash Raj Films. 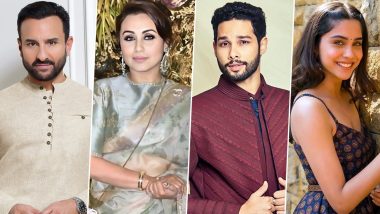 It was a huge blow to all film exhibitors when the theatres, multiplexes, cinema halls had to be shut down in the wake of coronavirus outbreak. Considering the health safety of individuals, to curb the further spread of this deadly virus, such a decision was taken. For almost eight months the theatres in the country were closed down and it was just recently when the Maharashtra and many other state governments gave a nod to reopen the cinema halls. As per latest reports, in order to extend support to these exhibitors, the makers of Bunty Aur Babli 2 have decided to release the film in theatres during the time of Christmas this year. Bunty Aur Babli 2: Saif Ali Khan, Rani Mukerji, Siddhant Chaturvedi Wrap Up Dubbing of Their Upcoming Movie.

Bunty Aur Babli 2 stars Saif Ali Khan, Rani Mukerji, Siddhant Chaturvedi and debutante Sharvari Wagh in lead roles. About the theatrical release of this crime comedy, a source revealed to Mid-Day, “With theatres expected to be up and running, filmmakers have begun zeroing in on release windows for their movies. Considering Bunty Aur Babli 2 is a light-hearted con caper, the makers feel it would be an ideal festival outing. The Christmas window is empty after the team of Ranveer Singh’s 83 decided to push its release to 2021. However, the talks are at a nascent stage. They will arrive at a decision in the coming weeks.” Laal Singh Chaddha to Miss Its Christmas Release? (Read Details).

With 50% seating capacity in areas outside containment zones, the Maharashtra government has allowed theatres to be reopened from November 5. The cultural affairs department and local authorities would be issuing the SOPs that every exhibitors will have to abide by. There has been no official announcement yet on the release date of Bunty Aur Babli 2. Directed by Varun V Sharma, the upcoming film is produced by Aditya Chopra under the banner of Yash Raj Films.

(The above story first appeared on LatestLY on Nov 11, 2020 09:24 AM IST. For more news and updates on politics, world, sports, entertainment and lifestyle, log on to our website latestly.com).