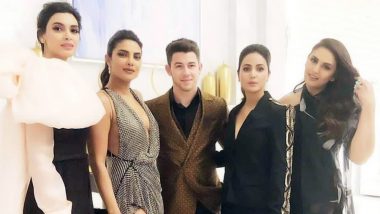 Bollywood stars had a gala time attending the Chopard's big party at the Cannes Film Festival last night. All the big names including Nick Jonas, Priyanka Chopra, Hina Khan, Diana Penty and Huma Qureshi were present at the big soiree and a recent picture shared by Ms Qureshi gives you an insight into how starry it was. Huma took to her Instagram account to share a picture from the bash last night and well, there's too much 'Desi' factor embedded in that. Cannes 2019: Diana Penty Is Slaying in Her Multiple Fashion Outings and We Are Awestruck – View Pics.

Nick Jonas happily posed with our Bollywood beauties to give us the picture of the year and his charming smile is enough to prove what a great time he had. We must say there's too much beauty to handle in a single frame and that's making us wonder if B-town should have its own version of Charlie's Angels. As Huma said, strong and real women support each other and what better picture than this to resonate the sentiment. With Priyanka Chopra’s Cannes 2019 Debut, Here’s a Look at Bollywood Celebs and Their First Red Carpet Appearances.

The Chopard party is the annual gala event held after the red carpet walk. It's more like an after-party where celebs ditch all their elaborate gowns and pick something chic and comfortable. Hina Khan was a surprise addition to this year's list and the girl made headlines for all the right reasons. Here's wishing for more such adorable clicks that keep the notion of catfights at bay.

(The above story first appeared on LatestLY on May 19, 2019 06:38 PM IST. For more news and updates on politics, world, sports, entertainment and lifestyle, log on to our website latestly.com).