Chhalaang, directed by Hansal Mehta, has released on Amazon Prime Video on November 13, which is today. It features Rajkummar Rao and Nushrat Bharucha in the lead. 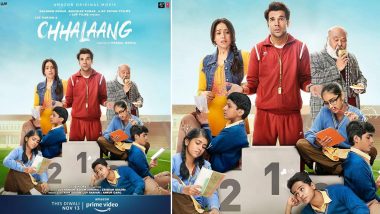 This festive season has turned out to be special for movie buffs. There have been a series of films across genres and languages that have been released on OTT platforms ahead of Diwali 2020. While some of them have turned out to be the viewers’ favourite, some have not been upto the expectations. The films that have released this week include Ludo, Suraj Pe Mangal Bhari, Soorarai Pottru, Laxmii and the latest one to join the bandwagon is Rajkummar Rao and Nushrat Bharucha’s film Chhalaang. Chhalaang Movie Review: Rajkummar Rao's Sports-Comedy is Less Hansal Mehta and More Luv Ranjan, and That's The Problem!

Chhalaang, directed by Hansal Mehta, has released on Amazon Prime Video on November 13, which is today. It features Rajkummar Rao as Mahendra “Montu” Singh Hooda, a happy go lucky PT teacher, and Nushrat Bharucha as Neelima “Neelu” Mehra, a computer teacher. This film has turned out to be blend of sports drama and rom-com. However, while some are pleased with the lead pair’s chemistry, some critics are not impressed with the film. Let’s take a look at what critics have said about Chhalaang. Chhalaang Trailer: Rajkummar Rao, Nushrratt Bharuccha, Mohammed Zeeshan Ayyub's Social Comedy From Heartlands of India Looks Endearing (Watch Video).

Hindustan Times - Chhalaang is star Rajkummar Rao and filmmaker Hansal Mehta’s fifth movie together, and even though it is the weakest of the lot — Aligarh and Shahid are both Oscar-worthy — it’s a consistently engaging picture, elevated by a handful of excellent performances, and a sharp script.

News18 - Mehta and Rao have joined hands for one more time and their understanding is quite visible. They set a tone within minutes and take us through some quirky scenes without being in our face, a pretty infamous Bollywood trait. While most of the Bollywood directors, including some top ones, believe in screaming about their characters’ virtues, Mehta let Rao ease out in steps.

Pinkvilla - While the movie has its heart in its right place, sadly Mehta wasn't equipped with enough content to comply with the length of the movie. Given the linear format, written by Luv Ranjan, there wasn't enough room for Mehta to move around when the pace slowed down.

Mumbai Mirror - Rao, as the village bumpkin tasked with a job that’s evidently beyond him, is effective and doesn’t drop his character even for a scene. Bharucha as the sharp-witted Nilu nails her clapbacks and somehow moulds herself into a reliable supporting character in the course of the film. Mehta, who has rarely attempted a film in this genre, isn’t entirely at sea here.

DNA - Hansal Mehta got out of his comfort zone and it's indeed a high jump to be witnessed from his recent outing Scam 1992 to Chhalaang. The filmmaker's last outing in the slight light-hearted genre was Simran which failed to make an impressive mark. But when working with Rajkummar Rao, Hansal manages to create magic onscreen.

Koimoi - if you’re looking for a sweet, harmless film to kill a couple of hours for you, go for it! It’ll do the most important thing one can do in such times – make you laugh.

So this is what critics have to say about Chhalaang. If you have watched this Rajkummar Rao and Nushrat Bharucha starrer, then share your views with us in the comment section below. Chhalaang is currently streaming on Amazon Prime Video.

(The above story first appeared on LatestLY on Nov 13, 2020 10:10 AM IST. For more news and updates on politics, world, sports, entertainment and lifestyle, log on to our website latestly.com).