Chhalaang is a sports comedy directed by Hansal Mehta. The movie is scripted by Luv Ranjan, while Ajay Devgn is one of the producers. Chhalaang stars Rajkummar Rao, Nushrratt Bharuccha, Saurabh Shukla, Mohammed Zeeshan Ayyub, Ila Arun and Satish Kaushik. 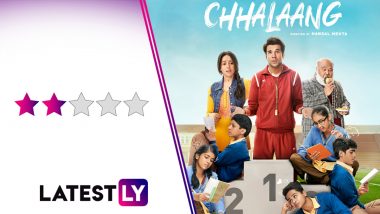 Chhalaang Movie Review: Chhalaang, streaming on Amazon Prime Video, brings the fabulous combo of Rajkummar Rao and director Hansal Mehta back after some impressive outings like Shahid, Alibag, CityLights and Omerta. Mehta has also been riding high on the wave of his recent Harshad Mehta series Scam 1992 that has proved to be a hit with the series. Chhalaang has the kind of comic flavour that is contained in films like Rao's own Stree, as well as the brand of cinema Ayushmann Khurrana is associated with  - situational comedies based in the rural parts of India. Chhalaang Song Le Chhalaang: Coach Rajkummar Rao & Kids Gear Up to Defeat Zeeshan Ayyub’s Team in This Upbeat Track.

So Chhalaang is set around a co-ed school in Haryana, where Mahinder aka Montu (Rajkummar Rao) is a PT Instructor. A laidback fellow with no real interest in teaching students sports, Montu mostly uses his classes to laze around or give them to other teachers to take extra classes. While his principal Gehlot (Ila Arun) bears his lackadaisical attitude because for her respect for his father (Satish Kaushik), Montu is also supported by a senior teacher Shukla (Saurabh Shukla). He is also part of the anti-romeo squad that troubles couples during V-Day.

In his life and his school, comes Neelu (Nushrratt Bharuccha), a computer teacher. Unlike Montu, she is more open-minded and liberal in her views, and he finds himself instantly attracted to her. However, he soon finds his job, and possibly, his love life, threatened by a rival, a newly-hired sports instructor Mr Singh (Mohammed Zeeshan Ayyub). To salve his pride and potential romance, Montu challenges Mr Singh that he will form a team that could beat Singh's in a month's time. Can Montu take that leap of faith from being a bad teacher to a good one?

Watch the Trailer of Chhalaang:

Hansal Mehta doing a comedy film with Chhalaang is not a novelty factor at all. Though the director is known for his serious movies, he has also done his share of light-hearted fare, including a very sanitised remake of American Pie! There is also the fact that Chhalaang is an underdog story with sports involved, and who doesn't like this genre? With a fantastic cast who has great comic timing, the wheels are in place for Mehta to make a great high jump to victory.

One of the writers of Chhalaang is Luv Ranjan (also producer), known for his films like Pyaar Ka Punchnama, and Sonu Ke Titu Ki Sweety. His films are known to have flawed male protagonists, whom we are supposed to root for, and that's exactly the mould in which Montu belongs to. For an underdog tale, he isn't the exactly the kind of character we want to cheer in reaching the winning mark (Some SPOILERS ahead).

For one, Monu is very incompetent at his job, and shows total lack of interest in improving himself, until it became a matter of male egos. The principal, at one point, reveals that he isn't qualified for the job and he only got it because he was a former student and on recommendation. Montu's activities before meeting Neelu is that of a goon and his attitude is that of a troll (even her parents once become victim of this).

It is also not clear why Neelu would bother to hang out with guy, considering the embarrassment he brought to her family, without showing much remorse for the same. Apart from the fact that he is played by Rajkummar Rao, who is clearly having fun with the role and along with an easy camaraderie with Shukla, become one of the few reasons why Chhalaang is more or less a one-time watch.

Even when it comes to competing with Mr Singh, Montu chooses a bunch of kids who would rather spend time studying than in sports, against what they want to do. He even emotionally scars a boy of being scared of dogs, in his many Lagaan-like attempts to train them.

On the other hand, Singh sir is actually good at his job, still he is portrayed as someone to root against. Sure, he forcibly holds a student, who showed him sass, on the ground during a kabaddi training. But otherwise, in any other film, he is the character we would want to root for. Even the infusion of feminism in the narrative by Neelu bringing the girls compete with the boys feel more farcical than a masterstroke. And let me remind you, Karan Johar did that before in Student of the Year! And Chak De India did it better in that terrific girls vs men hockey match! At least Chhalaang would have acquitted itself, if the sports sequences were done right, which is also not the case here. Nushrratt Bharuccha’s Deedar De from Chhalaang v/s the Original Song from Dus - Which Track Has Your Vote?

It also doesn't help that none of the students are given any kind of personality, though all are played by some naturally talented kids. Even Montu's brother, who felt like a major character in the first half, gets minimal scope in the latter half. The writing is inconsistent even for other characters. Like, take Shukla for example. He was progressive enough to support Gehlot to become the principal, years back despite objections raised on her gender, to the point that his married life was ruined. And yet he has no problem with his protege indulging in moral brigading. Still, the bigger problem of Chhalaang is wholly with Montu.

I don't mind having an anti-hero as the protagonist. The problem comes when the film wants us to cheer for him, without giving us ample convictions to do so. The only moment that happens comes in the very end, when Montu vindicates himself in a speech. By then, it is too little, too late.

Maybe this was some kind of message from Mehta to us. Chhalaang's climax preaches about parents needing to play their part in encouraging kids to play more sports, but the real message could be something else. Dealing frequently with trolls on his social media timeline, maybe Mehta wants us to see Montu as the kind of hero we should be used to in this 'New India'. And that, if true, is just sad.

PS: This is the second Rajkummar Rao movie of the week that has a Pinky. Weird coincidence?

- Some Good Lines (Zeishan Quadri to be credited?)

Chhalaang is an unfortunate example that not every time your fave director and actor reunite, you would get the best results. As a sports comedy, it struggles to make us care for its flawed protagonist, thanks to some very inconsistent writing. Chhalaang is streaming on Amazon Prime Video.

(The above story first appeared on LatestLY on Nov 13, 2020 12:01 AM IST. For more news and updates on politics, world, sports, entertainment and lifestyle, log on to our website latestly.com).