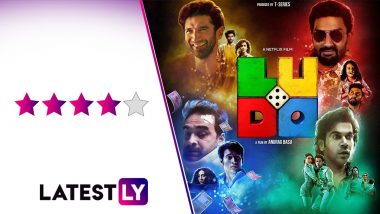 Ludo Movie Review: As a film, Ludo acquits quite a few people of their past mistakes, while also reiterating how awesome Pankaj Tripathi and Rajkummar Rao are as actors. It acquits Anurag Basu, a very talented directed with an eye for aesthetics, who couldn't rise up to his potential in most of his films. It acquits Abhishek Bachchan, an actor capable of delivering powerful performances under a fine director, but not able to do so recently. It acquits Aditya Roy Kapur, who has often been labelled 'wooden' by many, including yours truly. For how long will this stand, I don't know. But Ludo not only extricates some amazing work from these actors, but also turns out to be one of the finest films of this year. Anurag Basu Reveals How His Upcoming Film Ludo Got Its Title.

Ludo is often touted as a successor to Basu's own Life... In a Metro, which isn't completely true. Yes, they have the same storytelling format - four, or rather five, storylines interwoven in a film, that intersects each other at various points, but stands out on their own. Just like Alejandro González Iñárritu's brilliant Amores Perros, or Mani Ratnam's underrated Yuva. But in terms of tonality, Ludo is way different from Life... In a Metro. It is funny in many parts, occasionally dark, adopts an irreverent tone and is still is surprisingly nuanced. And yes, Pritam and his gang also don't springing up at random junctures.

I found Ludo to be a much better, more refined film than Life... in a Metro, though the latter has one of the most enjoyable Irrfan Khan performances, God bless his soul. But we have Tripathi in rocking form here, so that makes up. Also I prefer Pritam's score in Metro over Ludo, even though Ludo has a couple of sweet tracks.

Watch the Trailer of Ludo:

Talking about influences, I was also reminded of the inimitable Lijo Jose Pelissery's Double Barrel, while watching Ludo. There is a particular hotel shootout sequence in the Anurag Basu film that bears a close semblance to a similar scene in Double Barrel. Certain characters in Ludo also share similar traits to the Malayalam multi-starrer film.

But when LJP, an otherwise amazing filmmaker, focuses more on style than substance in Double Barrel, Basu keeps emotions and moments right in the heart of the film, while also having fun with his characters. The screenplay (written by the director himself) churns in surprises at every turn, and most of the characters are interesting, likeable and feel well-written. Which is why Ludo succeeds where DB only manages to pass muster.

Talking of the plot, Ludo follows a hyperlink narrative, as it puts several characters in a Ludo game of fate. As the dice controls which coins would reach 'home' first, sometimes trampling over others, similarly Fate puts the characters here in quirky situations, and then make them inadvertently play a role in each other's lives. The nature of the game is explained through the tally of sins and virtues by Basu, who also appears as the narrator (with a surprise twist in his character). Since Basu is also the director controlling the writing and the characters of the film, it makes apt sense that he does so in the movie too!

The first main character we meet is Sattu Bhaiya (Pankaj Tripathi), a wanted gangster, who kills a naked man and his wife in the beginning of the film and sets of the chaos. As he returns to his hood, he picks up several of his debtors, and a witness to his crime, Rahul (Rohit Saraf). Rahul is a down-on-luck, homeless and meek mall employee, whose visit to Sattu's den intertwines his fate with Sheeja Thomas (Pearle Maaney), a Malayali nurse, with very minimal knowledge of Hindi, along with a forbidden bag of cash.

We then meet Akash (Aditya Roy Kapur), a ventriloquist and a voice artist, who comes across a sleazy reminder of his past no-frills-attached affair with Shruti (Sanya Malhotra). Together they have to find out the source that brought back their amorous encounter in public domain, and bury it before her marriage to a young tycoon.

Then we meet Alok Gupta aka Aalu (Rajkummar Rao), a former conman-turned-dhaba owner, who styles himself after Mithun Chakraborty. He is still besotted with his love from teenage years, Pinky (Fatima Sana Shaikh), who has married someone else and now has a baby with him. And it is this undying love for her that commits him to help her out when her husband gets trapped in a murder case.

Finally, we meet Bittu (Abhishek Bachchan), Sattu Bhaiya's former lieutenant, who left the world of crime to marry his love but gets arrested. After spending six years in prison, Bittu returns to a world where his wife is someone else's now and his little daughter is sent to a hostel. A chance encounter with a little girl (Inayat Verma) reminds him of a life that he could never have had. OTT Releases Of The Week: Akshay Kumar’s Laxmii, Abhishek Bachchan’s Ludo, The Crown Season 4, Suriya’s Soorarai Pottru, Rajkummar Rao’s Chhalaang and More.

What impressed me about Ludo is that I was finding difficulty to choose a favourite among these tracks. Each plotline has its great moments, its unique strengths and weakness. Pankaj Tripathi track is brimming with some hilarious black comedy, bolstered by the actor's terrific comic timing and amazing screen command.

The Aditya-Sanya storyline is enlivened with exuberant writing and the performances of both the actors, giving a fresh spin to romcoms. While Sanya continues to show why she deserves to be cast in more films, it was refreshing to see Aditya loosen himself up and give his best performance in quite some time.

Rajkummar Rao's storyline gives the actor an opportunity to not only brush up his recently-discovered comic skills, but also his underused dancing skills too. He plays a character who begins to shake his hips and swings his legs when facing a troubling worry and anxiety. Rao is stunningly brilliant in the role, supremely energetic and heart-winning. He has the perfect company in the underrated but fantastic Fatima Sana Shaikh, doing immense justice to the role of the opportunistic former friend, who finds trouble recognising the true value of people.

The Rohit-Pearle track feels slightly weaker compared to the rest, more so because I really wanted to see an 'Ek Duje Ke Liye' romance developed between the two characters, that gets lost in translation in the ensuing chase sequences. Still, there is a soft corner for this track, because I am prejudiced as a Mallu, and for recreating that funky "Pistah" song from Neram. Rohit Saraf, who was so good in The Sky is Pink, and Pearle Maaney, former television host and Bigg Boss Malayalam contestant who deserved more spotlight in Mollywood, are very likeable in their roles.

Finally, speaking on the Abhishek Bachchan's track, it may be the most predictable of the lot. But that is overpowered by the tenderness and poignancy in the storyline, seen in the scenes between Bachchan and the young Inayat. Abhishek, who once got his breakout recognition as a performer with Yuva, reaffirms that he is a director's actor, as he gives a sensitive performance of a softie trapped in a tough exterior. He shared a heartwarming camaraderie with a naturally spunky Inayat, who sparkles as the kid obsessed with CID show and craves for parental love. Among the supporting cast, Paritosh Tripathi and Shalini Vatsa - both Sacred Games alumni - stand out!

Any glitches to what stops Ludo for being a perfect entertainer? At two and a half hours runtime, Ludo is a bit lengthy, though the pacing issues won't bother you that much thanks to its interconnecting storylines. Also, I felt that Basu opted for a softer, conventional ending for most of the tracks seeking that quintessential ending.

- The Runtime and the Underwhelming Conclusion

Anurag Basu roars back to form with one of his best efforts as a director, if not THE best. Ludo has a superlatively engaging screenplay, taut direction and amazing performances from the entire cast. Do not miss this! Ludo is streaming on Netflix from November 13.

(The above story first appeared on LatestLY on Nov 12, 2020 01:30 PM IST. For more news and updates on politics, world, sports, entertainment and lifestyle, log on to our website latestly.com).