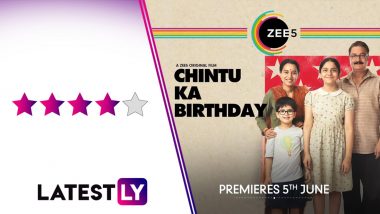 Chintu Ka Birthday Movie Review: Does Chintu Ka Birthday deserve a OTT release that it got in 2020? Chintu Ka Birthday is the comedy group, All India Bakchod (AIB)'s first venture into Bollywood. The movie which was made in 2018 deserved a bigger push and more promotional blitzkrieg, which its debutant producers could have already given them with their association then. However, the noise around the film was muted over the #MeToo allegations that rocked (and split) the group. Chintu Ka Birthday Trailer: Vinay Pathak and Tillotama Shome Starrer Family Drama Promises to Be an Intense Emotional Ride (Watch Video).

The producers kept arranging special screenings for Chintu Ka Birthday (after it was dropped by MAMI over the scandal), and we have been hearing positive things about the film. Now that it makes a quiet release on Zee5, who has become a rescuer for stuck films like Tigers and Ghoomketu, I realise that everything I have read about Chintu Ka Birthday is true - it is a winner, alright!

The premise may feel dated - Chintu Ka Birthday is set in 2004, after the Saddam Hussein regime was felled by the US forces. What the film wants to tell you, though, is relevant now, especially in these times when you are surrounded by all sorts of negativity. Perhaps, the most heartwarming film to come out in the year, that is plagued from fascism to virus to locusts, CKB's stubborn insistence to believe the positivity within you is something you need right now. Even when things look bleak.

The propagator of such genuine goodwill is Madan Tiwary (Vinay Pathak), the benign father of the titular six-year-old cherubic Chintu (Vedant Chibber), and an unlikely hero. He comes across as a meek person, who bears his mother-in-law's (Seema Pahwa) taunts silently, with a smile on his face. But hidden behind this meekness is a rigid determination to do things right for his family, even if he is racked by the guilt of bringing them to a hell-hole.

For Madan, who is in water-filter business, had come to Iraq seeing the country's lack of proper clean water facilities as a good prospect. When the business was booming, he brings his family, which includes his wife Sudha (Tillotama Shome), teenage daughter Lakshmi (Bisha Chaturvedi, confident), son Chintu and his mother-in-law. After the fall of Hussein's regime, the family has been caught in the crossfire between US military and the Iraqi militants. The Indian government claims that they have evacuated all their citizens. They didn't.

As Madan is seeking help from his folks back home to rescue them, the family decides to give Chintu a birthday celebration that he is craving for. With the city being bombarded everywhere, including the school that Chintu studied and was supposed to distribute toffees, it isn't an easy task.

When two US soldiers (Reginald L Barnes and Nathan Scholz) land at their doorstep, it looks like Chintu may not have a party at all. And like his persistent family, even we are moved enough to cheer for him to have one!

Chintu Ka Birthday does not have a great budget or great scale. Nearly all the action - save for an exposition-filled animation sequence - is set within Tiwary household. The outside chaos is emphasised through conversations, phone calls and offscreen blasts. Despite the limitations of the setting, directors Devanshu Kumar and Satyanshu Singh are effective in making a very engrossing drama with some lovely moments. Chintu Ka Birthday is just another example of how fine storytelling can still make a good film, even if you lack the A-listers in the cast or Dharma production values.

At times, Chintu Ka Birthday feels like a theatre-like production, but the setting also lets the characters to shine in the interactions and the actors to put their best foot forward. How can we not let out a smile when the family comes out with a makeshift cake for Chintu? Or when Sudha takes a stand for her husband against her mother, when the taunts become one too many. Even an earlier little playful scene between Madan and Sudha about having a third kid adds genuine realistic nuances to the narrative.

There are also moments of genuine tension in the film, especially after the soldiers discover the Tiwary's Iraqi landlord (Khalid Massou) in their house and think they are consorting with the militants.

My favourite scene is a conversation that happens between Madan and the white soldier, Reed (who looks like a lankier Hugh Jackman). It reveals a tragic backstory for one of the characters, while also bringing pathos to Madan as a person, whose simple-minded goodness is admirable. It doesn't matter to him if Saddam was wrong or Bush - all he wants is for his son to have the best birthday party.

Even the US soldiers aren't depicted as cliches, they are shown as a frustrated lot caught in a war that is mostly to fulfil the ego trip of their (then) President. Even they have their differences - while CKB doesn't outrightly say it out - which could be result of the racial differences. The only character that kind of disappointed me was the Nani, although Pahwa was too good in the role. Hers was a figure that mostly stuck with the barb-throwing, story-telling cliche we associate with grandmotherly characters.

The ending may feel a little too cinematic, but tell me honestly - if you have watched the film - would you have wanted the birthday party to end in a different way? Siddharth Diwan's camerawork helps in capturing the frenetic drama within the restrictive space, while Charu Shree Roy's editing keeps the film tightly paced.

All the actors have performed nicely, be it the veterans Vinay Pathak (fantastic, especially in the more emotional scenes) or the supremely underrated Tillotama Shome (amazing performance). Or the kids, Chibber (too sweet) or Chaturvedi. Even the two Iraqi kids who plays Chintu's only party attendees are too good.

- The Nani Character Could Have A Better Arc

(The above story first appeared on LatestLY on Jun 05, 2020 12:01 AM IST. For more news and updates on politics, world, sports, entertainment and lifestyle, log on to our website latestly.com).