Dasvi, starring Abhishek Bachchan, Nimrat Kaur and Yami Gautam Dhar in the lead, is currently streaming on Netflix and Jio Cinema. As per reports, the film has been leaked online and is available on torrent sites and telegram channels. 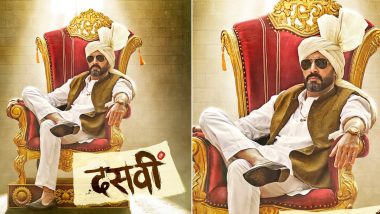 Dasvi, starring Abhishek Bachchan, Nimrat Kaur and Yami Gautam Dhar in the lead, is currently streaming on Netflix and Jio Cinema. The film helmed by Tushar Jalota released today and has received mixed response from critics. The performances of the film’s least cast have been praised by the audience, however, the script seems to have fallen weak for many. The film which released today is yet to be watched by many, however, it has become victim of online piracy. As per reports, the film is available on torrent sites and telegram channels. Dasvi Movie Review: Abhishek Bachchan, Nimrat Kaur, Yami Gautam Dhar’s Film Receives Mixed Response From Critics.

Dasvi full movie in HD has been leaked on several torrent sites like Filmywap, Onlinemoviewatches, 123movies, 123movierulz, Filmyzilla, and other pirated versions of the series in HD (300MB free download in 1080p, 720p, HD online) are available for the audience to watch.

Apart from Dasvi, there are several other movies and series that have too become the victims of online piracy. It includes the recently released The Kashmir Files, Morbius, The Fame Game, Salute among others that have also been leaked online and made available in HD prints.

(The above story first appeared on LatestLY on Apr 07, 2022 12:43 PM IST. For more news and updates on politics, world, sports, entertainment and lifestyle, log on to our website latestly.com).