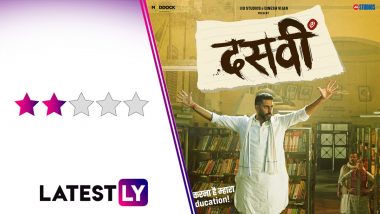 Dasvi Movie Review: Tushar Jalota's Dasvi is a political satire that is loosely inspired by Lalu Prasad Yadav-Rabri Devi story. In his film, the story is set in a fictional state called Harit Pradesh, which is a cross between Uttar Pradesh, and Haryana. Gangaram Chaudhary (Abhishek Bachchan) is the CM of the state, who is convicted in a scam and sent to jail. He assigns his meek and docile wife Bimala Devi (Nimrat Kaur) to become the CM instead, while he hopes for a relaxing time in the prison backing on his clout. Dasvi: Abhishek Bachchan Fulfils His Year Old Commitment, Creates History by Screening His Film in Agra Jail for the First Time.

Unfortunately for him, the new prison warden happens to be Jyoti Desawale (Yami Gautam Dhar), an honest officer who strips Gangaram of his luxuries. Meanwhile, Bimala Devi has begun enjoying the taste of power, and now she wants her husband to stay in prison as long as possible so that she can continue being CM. In between, the eighth-passed Gangaram decides that to get more jail privileges, he will try for tenth examinations, failing which he will not become the Chief Minister again.

Dasvi, written by Suresh Nair and Ritesh Shah, has an interesting storyline that pokes fun at the lack of educational prowess of our leaders who are then handled the responsibility of the state's administration. The premise is brimming with humorous potential, especially Bimala's sudden ascension to power and Gangaram finding himself trapped in the jail without his perks of power.

So why is it that I could only manage a couple of snickers here and there, and went through the whole movie waiting for it to drop an excellent zinger? Alas, Dasvi could not eke out enough laughs out of its actors, who are more than commendable here, and the situations that had enough comic quotient.

The writing deserves some blame here, as while it takes enough potshots, the screenplay doesn't come across as smart and at times, feel very rushed. Like we have to take Bimala Devi's sudden transformation from a meek wife to a calculating politician with a pinch of salt. Even the portions where Gangaram focuses on studies goes from mildly fascinating to weakly farcical. It begins with a touch of surreality when Gangaram begins to imagine himself being part of history, but that aspect is brushed off to go the Munna Bhai MBBS route, where everyone in the prison helps Gangaram to study. And if you don't know how that's going to end, Boo! OTT Releases of the Week: Abhishek Bachchan’s Dasvi on Netflix, Kunal Kemmu’s Abhay Season 3 on ZEE5, Chris Pine’s All the Old Knives on Amazon Prime Video and More.

The actors are enjoyable to watch, though. It is after a long time that I can finally say Abhishek Bachchan isn't sleepwalking in his performance. You can really see the actor having fun with the role, even if that fun doesn't always translate to laughs. Abhishek is particularly outstanding in a scene in the climax, where he gives to his tears while not letting go of his proud composure.

Yami Gautam gives a strong showing as the upright police officer, giving her frequent takkars with Gangaram a sense of naturality. It is nice to see the actress getting more impressive with her each outing. However, the true show-stealer is Nimrat Kaur. Her transformation from a demure 'CM ki Biwi' to being a conceited political player is quite fun to watch, and the actress kills it with her enjoyable performance. In fact, I most enjoyed the scenes between Gangaram and Bimala, and I wish the film was more about them. Come on, even you would go for a mini-applause, when you hear Bimala tell her husband, "Itne dheere kyun bol rahe ho? Aap CM ke husband ho!"

- Stretched in the Middle Portions

The lead actors have done good in their roles, but Dasvi doesn't capitalise well on their commendable efforts and the interesting premise. The humour is sorely lacking here, and the satire fails to impress in most parts. Dasvi is streaming on Netflix.

(The above story first appeared on LatestLY on Apr 07, 2022 09:50 AM IST. For more news and updates on politics, world, sports, entertainment and lifestyle, log on to our website latestly.com).