We look for promising content on the OTT platforms every week, so that audience can chill and binge-watch what they prefer and like. This week we have some amazing releases on OTT, let's quickly take a complete look at the series and movies releasing on the OTT platforms this week. 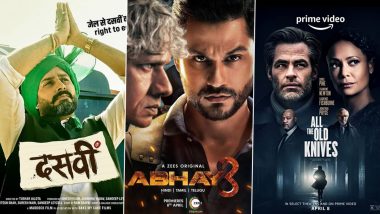 We are kickstarting the first week of April 2022 and we have a long list of some great releases. With that, there are several promising series and movies releasing on OTT platforms like Disney+ Hotstar, Amazon Prime Video, Sony LIV, Netflix, ZEE5 and more. Talking about the biggest release of the week it would be Dasvi, which will drop on Netflix and Jio Cinema on April 7. Helmed by Tushar Jalota, the movie revolves around the life of Ganga Ram Chaudhary, a powerful yet uneducated man, also a rustic politician who suddenly gets focused to clear his class 10th while being in prison. The comedy-drama stars Abhishek Bachchan, Yami Gautam Dhar and Nimrat Kaur in key roles. Dasvi Trailer: Abhishek Bachchan, Yami Gautam and Nimrat Kaur’s Netflix Film Hits the Right Chord and Tickles the Funny Bone (Watch Video).

Another big release of the week would be Abhay Season 3, which is all set to stream on ZEE5 from April 8. Directed by Ken Ghosh, the synopsis of the third season reads, "It covers about Abhay faces a new unknown threat, a dark force capable of exploiting anyone in the name of a twisted belief." The crime-thriller web show stars Kunal Kemmu, Tanuj Virwani, Rahul Dev, Divya Agarwal and Vijay Raaz, among others. Another interesting release of the week would be All the Old Knives, which will release on Amazon Prime Video and in limited theatres on April 8. The espionage-thriller film stars Chris Pine, Thandiwe Newton, Laurence Fishburne and Jonathan Pryce in pivotal roles. Abhay Season 3 Trailer: Kunal Kemmu as a Cop Battles With Death in This Dark ZEE5 Series (Watch Video).

(The above story first appeared on LatestLY on Apr 03, 2022 03:07 PM IST. For more news and updates on politics, world, sports, entertainment and lifestyle, log on to our website latestly.com).