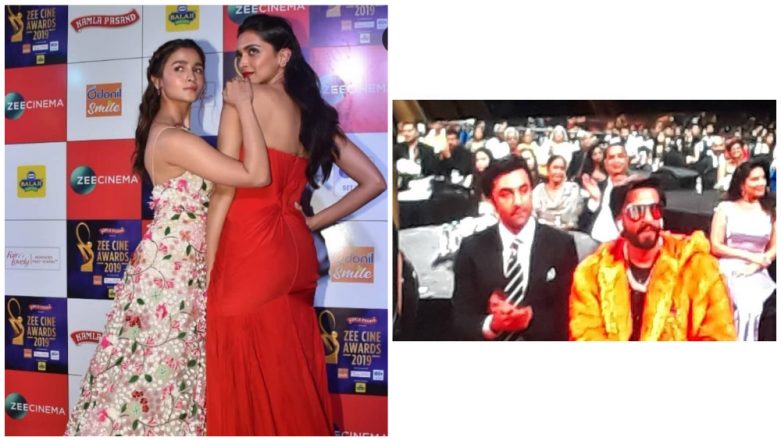 Zee Cine Awards 2019 brought together the shining stars of Bollywood! They were all seen in their best of dresses, making the heads turn on the red carpet. The event was all about fun skits, performances, tributes and trophies. However, what took the followers of the award function by surprise was this amazing bonding between Deepika Padukone and Alia Bhatt at the red carpet. Not just this but their respective real-life partners Ranveer Singh and Ranbir Kapoor to bonded with each other in the function! Zee Cine Awards 2019 Full Winners List: Vicky Kaushal, Katrina Kaif, Kartik Aaryan, Janhvi Kapoor Take Away the Trophies Home.

These four stars have proved time and again that there is no bad blood between them despite their past relationships. They have been spotted having a fun camaraderie with each other on various instances, one of them being the Zee Cine Awards 2019!

Alia looked pretty in a pink and white floral gown with her hair styled in waves. On the other hand, Deepika could set the carpet on fire with her bold red gown and sexy look. Meanwhile, Ranveer and Ranbir were their dapper selves at the show. This one picture of them sitting beside each other is killing it! Check out the pictures below.

When Alia and Deepika Be Goofy!

A Big Hello From Ranveer Singh!

Speaking of performances, the night was made lively with the energetic performances of Madhuri Dixit, Kriti Sanon, Ayushmann Khurrana to name a few. Also, the hosts, Vicky and Kartik Aaryan led the entire show with their humorous compering. The show also paid tribute to legendary late actress, Sridevi. All in all, it was one of the best nights for the celebs! Coming back to DeepVeer and RAlia, how about a film starring them four?