Yeh Ballet’s director Sooni Taraporevala came across Deepika's advertisement and went on to post a long message on Instagram talking about how she was shocked to see the advertisement. 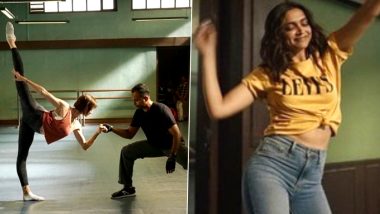 Plagiarism and piracy have become a serious threat to our industry. We often see different people from the industry call out each other for copying work and not giving credit and many a times, fans also notice these rip-offs and call out the makers of the project for copying someone else's work. Pages like Diet Sabya are all about making people aware of such acts of plagiarism. Recently, Deepika Padukone's denim jeans advertisement also came under the limelight and is being accused of copying Netflix's film Yeh Ballet's studio set. Deepika Padukone Blatantly Copies Irina Shayk! Indian Actress’ New Ad Is a Complete Rip-Off of Hot Russian Model’s 2013 Photo Shoot.

Yeh Ballet’s director Sooni Taraporevala came across Deepika's advertisement and went on to post a long message on Instagram talking about how she was shocked to see that the makers of the ad had plagiarized her film's set down to the very last detail. She went on to talk about how there is no such studio in Mumbai and the team built it from scratch and dismantled it after the shoot. She called out the team who worked on Deepika's ad and questioned, "Would Levi’s and the director ever think of doing that in the west without permission/acknowledgement, and passing it off as their own creative work?"

Sooni shared a series of pictures with her message for proof. In the first two pictures, you can see the team of Yeh Ballet in the studio set-up. The third screenshot shows a screengrab of Deepika's advertisement where she is seen dancing. She then added a screenshot of Rupin Suchak, production designer of the ad, admitting that they took inspiration from Yeh Ballet's setup. She then added a couple of pictures showing how they worked on creating the setup of the studio. She concluded by saying that the copycat culture in India needs to be called out and cancelled.

Talking about her accusation with the brand, Deepika had earlier said, "Authenticity, Originality and Honesty are values that the brand has been built on and are values I identify with the most! For those unaware, I have always been a jeans and t-shirt kind of girl. The right pair of jeans not only make me feel comfortable but also confident! I am absolutely honoured and delighted to be associating with one of the world's most iconic brands-Levi's." Sophie Turner, Deepika Padukone And Others Feature On Fake Horror Movie Posters For Louis Vuitton Pre-Fall 2020 Collection.

Meanwhile, on the work front, Deepika Padukone will be see alongside Hrithik Roshan in Fighter. Apart from this, she will be seen in Shakun Batra's directorial unnamed film co-starring Ananya Panday and Sidhant Chaturvedi and in the upcoming sports flick '83 with her husband Ranveer Singh. She also has Baiju Bawra, Sanki, Pathan, an Indian adaptation of Nancy Meyers's 2015 hit Hollywood film The Intern in the pipeline.

(The above story first appeared on LatestLY on Mar 03, 2021 10:11 AM IST. For more news and updates on politics, world, sports, entertainment and lifestyle, log on to our website latestly.com).