Urvashi Rautela attended the 75th annual edition of Cannes in France. Leonardo DiCaprio was also in the country for a different purpose. So where did the twain meet? 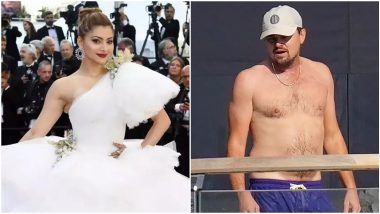 Recently, Urvashi Rautela made headlines when she claimed that Leonardo DiCaprio, popular Hollywood star, praised her while they met at Cannes 2022. Urvashi was part of the India Pavilion entourage. This is what she said, "I was freaking out and falling short of words after receiving compliments from Leonardo DiCaprio. I was so emotional and could feel happy tears in my eyes. At the same time I was blushing too." She also added. "He also appreciated me as a very talented actress. I was waking up pinching myself. Did that really happen last night? Was I dreaming about the sweet moment?" Urvashi Rautela Claims Leonardo DiCaprio Complimented Her at 2022 Cannes Film Festival.

Now some of the Twitter users are doubting her claim, as there was no pics of Leonardo DiCaprio attending the prestigious film festival this year.

leo is not even at cannes??? maybe news sites need to report that too https://t.co/4pyERFpDHe

That said, Leonardo DiCaprio was in France itself when the film festival was ongoing. He was vacationing in South of France with his  friends as per a report in Daily Mail. Pictures of Leo lazing around shirtless on his good friend Sir Philip Green's £100 million superyacht Lionheart were going viral. Leonardo DiCaprio Donates $10 Million To Support Ukraine Amid the War Against Russia.

Leonardo DiCaprio smokes with his buddies on board Sir Philip Green's £100million superyacht in the South Of France https://t.co/22C1ndBxGZ

There are no other pics or news of the star attending the 75th edition of Cannes Film Festival, though his France vacay made people think he would do so. So if we have to believe Urvashi Rautela's claims about the Titanic star praising her, did they meet in some private party? Also we are curious as to which movie of hers did the Oscar winning actor see to discover that she was "a very talented actress".

(The above story first appeared on LatestLY on May 26, 2022 02:09 PM IST. For more news and updates on politics, world, sports, entertainment and lifestyle, log on to our website latestly.com).