The artist has long been involved in initiatives devoted to combating the climate catastrophe. Already in 1998, as a 25-year-old, he founded the Leonardo DiCaprio Foundation with his family, supporting "sustainable development around the world". 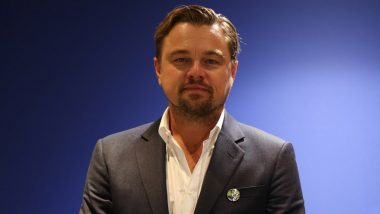 Hollywood star Leonardo DiCaprio has donated $10 million to support Ukraine, which is fighting against Russia. DiCaprio also has a personal motive. The actor's maternal grandmother, Helene Indenbirken, was born in Odessa as Jelena Stepanovna Smirnova, reports polishnews.co.uk. In 1917, she emigrated from there with her parents to Germany, where DiCaprio's mother was born. Idina Menzel Extends Her Support to the Ukrainian Girl Whose Video of Singing a Song From Bunker Went Viral – WATCH.

Raised mainly by his mother DiCaprio, he was also very close to his grandmother, who was a supporter of his career from the beginning. His grandmother, who died in 2008 at the age of 93, almost until the end appeared with her grandson and daughter at the premieres of his films, which is reminiscent of the American industry media on the occasion of generous support for Ukraine.

DiCaprio allocated as much as USD 10 million to support Ukraine and did not plan to announce it to the whole world. The information was announced by the International Visegrad Fund -- a project of the Visegrad Group aimed at financial support for international initiatives. Following him, the American media repeated it. Russia-Ukraine War Latest Updates: IBM Suspends All Business in Russia; World Bank Approves $723 Million in Loans, Grants for Ukraine.

Six-time Oscar-nominated actor and producer, winner of a gold statuette for his role in Alejandro Gonzalez Inarrit's 'Revenant', he has been writing "actor and ecologist" in the profession column for years. The artist has long been involved in initiatives devoted to combating the climate catastrophe. Already in 1998, as a 25-year-old, he founded the Leonardo DiCaprio Foundation with his family, supporting "sustainable development around the world".

(The above story first appeared on LatestLY on Mar 08, 2022 01:52 PM IST. For more news and updates on politics, world, sports, entertainment and lifestyle, log on to our website latestly.com).