In Durgamati, Bhumi's character, Chanchal, in the film is locked up in an isolated mansion. The haunting theme of the song goes well with this idea of solitude. Indian folk singer, Malini Awasthi, has sung "Heer". 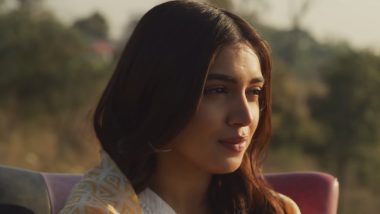 What's even a Bollywood horror movie without a few songs? A new song from the upcoming horror film, Durgamati, has dropped online. The track, titled "Heer", is a mellow romantic number with very powerful female vocals backing it up. It has a bit of a "Lambi Judaai" vibe to it. The video explores the romantic relationship between Bhumi Pednekar, who plays the female leads, and Karan Kapadia, appearing in supporting role in the film. The melody is not just romance, but also heartbreak and solitude. Durgamati: The Myth Song Baras Baras - Tanishk Bagchi Thanks Bhumi Pednekar and Karan Kapadia for Making the Song Look Beautiful.

Bhumi's character, Chanchal, in the film is locked up in an isolated mansion. The haunting theme of the song goes well with this idea of solitude. Indian folk singer, Malini Awasthi, has sung "Heer". Firstly, it is so impressive to see Bollywood give the spotlight to someone else other than the five commercially popular names. The Padma Shri winner singer has rarely given her voice to a Bollywood number. She certainly believes in the song, which is enough for you to give it a try. We are sure you'd be hooked on to it after one go. Bhumi Pednekar's Colourful Separates for Durgamati Promotions May Not Strike a Chord with Fashion Aficionados.

The music for "Heer" is also composed by Malini, along with Naman Adhikari, Abhinav Sharma. Dipti Misra is the lyricist. Megha Vikas Bali is the music supervisor. Go, women!

(The above story first appeared on LatestLY on Dec 05, 2020 07:15 PM IST. For more news and updates on politics, world, sports, entertainment and lifestyle, log on to our website latestly.com).