Cheat India is reportedly based on the theme of scams in the educational system in India. 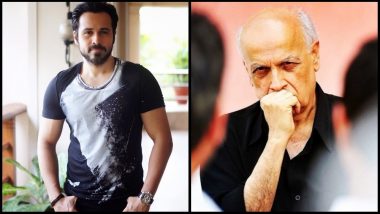 Emraan Hashmi is right now excited for his next big film ‘Cheat India’. The movie is said to be based on the theme of scams in the educational system. However, even before the film has gone on the floors, it has been caught in the controversy of ‘plagiarism’. Delhi-based writer Dinesh Gautam and actor Imran Zahid have alleged that this film by T-Series, Ellipsis Entertainment and Emraan Hashmi production has been plagiarized from their own film ‘Marksheet’. The duo registered with the Indian Script Writers Association last year. Dinesh and Imraan apparently discussed the film with filmmaker and mentor Mahesh Bhatt before rolling out the project, reports Mumbai Mirror.

Dinesh told the tabloid, “After Emraan Hashmi announced his film Cheat India in January, we filed an official complaint with the Writers Association. Now, we will be sending legal notices to the three producers as our grievances have not been acknowledged. The script may not have been copied verbatim, but the concepts and case studies used in the story are the same. We shared every bit of our story with Bhatt saab and everybody knows how small this industry is. It is an embarrassing situation.”

However, a top executive associated with Cheat India refute the allegations saying, “Some nondescript people are trying to gain publicity by piggy-backing on a big banner film. From 3 Idiots and Chalk N Duster to Aarakshan, hundreds of films have been based on our education system. While the title and story were registered around eight months ago nobody knows what Cheat India is about as the script is not yet complete and the makers have not had any narrations.”

Well, it must be seen who wins the case as Dinesh and Imran have vowed to fight the case against the Cheat India makers. Stay tuned for more updates on the development.

(The above story first appeared on LatestLY on Mar 27, 2018 09:11 AM IST. For more news and updates on politics, world, sports, entertainment and lifestyle, log on to our website latestly.com).