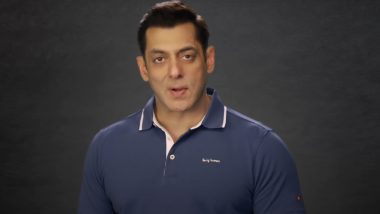 Mumbai, May 13: Ahead of the release of "Radhe: Your Most Wanted Bhai", superstar Salman Khan on Wednesday made an appeal to his fans to shun piracy and watch his much-awaited film on the right platform. Radhe: Salman Khan and Disha Patani's Film Trailer Leads To Funny Memes and Jokes Online!

The action-drama was initially scheduled to arrive in cinema halls but due to the surge in COVID-19 cases in the country, the makers decided to release

"Radhe" on DTH services, OTT platform and in select theatres on May 13 on the Eid festival. "No piracy in Entertainment. .. #Radhe," Khan captioned a short video on social media.

It takes the hard work of several people to make one film and it hurts a lot when some take the route of piracy to watch the final product, said the 55-year-old actor in the clip. Radhe Song Seeti Maar: Salman Khan And Disha Patani Feature In A Terribly Choreographed Hindi Version Of Allu Arjun's Hit Number From DJ.