Radhe: Your Most Wanted Bhai was earlier scheduled to release on Eid 2020 but was postponed owing to the COVID-19 pandemic. Radhe will now release on May 13 in theatres and on the OTT platform simultaneously. Here, are a few memes from the film's trailer. 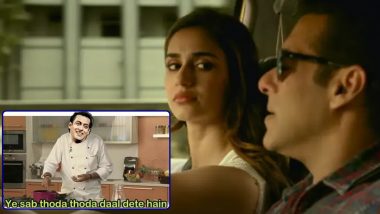 Salman Khan fans are on cloud nine right now, as the much-awaited trailer of Bhai's Radhe finally released on April 22. The actioner which stars Disha Patani as the sizzling female lead and Randeep Hooda as the villain has been helmed by Prabhu Deva. Also, going by the trailer, Radhe: Your Most Wanted Bhai looks like a typical Salman's film filled with a hell lot of action scenes. The trailer has gotten a great response from the audience and fans are in love with Khan's swag. Having said that, along with the waah waah's, memers have also filled the social media with funny jokes about the trailer. Radhe Trailer: Did Salman Khan Lock Lips With Disha Patani? Fans Are Celebrating Bhai Breaking His 'No Kissing' Clause!

Right from claiming that Radhe looks just like Wanted to slamming the upcoming flick by calling 'Dabangg 3, Race 3, Tubelight masterpieces, meme-makers did not spare. That's not it, as some jokes also feature Disha Patani and trust us you'll laugh out loud if you look at them. Here, check it out. Radhe Trailer: 5 Seeti-Maar Dialogues of Salman Khan From the Actioner That Are Massy AF!

Dabangg 3, Race 3 and tubelight seems like masterpiece in front of #Radhe lmao... This is not even 10% of original korean movie, This looks horrible @BeingSalmanKhan take smart decision and dump it on OTT 😂#RadheTrailer :- pic.twitter.com/74D1vSom3e

Me to salman bhai fans -

Meanwhile, Radhe: Your Most Wanted Bhai will release on May 13, 2021, Eid, in theatres and on the OTT platform ZEE5 simultaneously. Earlier, the film was supposed to hit the screens in Eid 2020 but was postponed due to the pandemic. Stay tuned!

(The above story first appeared on LatestLY on Apr 22, 2021 03:56 PM IST. For more news and updates on politics, world, sports, entertainment and lifestyle, log on to our website latestly.com).