Flight is a thriller directed by debutant Suraj Joshi. Mohit Chadda, also one of the film's producers and writers, play the lead, while the film also stars Pavan Malhotra, Zakir Hussain and Viveck Vaswani. 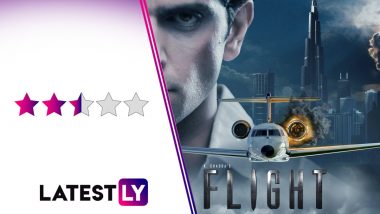 Flight Movie Review: Just like its protagonist, debutant director Suraj Joshi's Flight seems to be a fan of old Hindi films. Especially the cult The Burning Train. But instead of several irritating characters trapped in a non-stop locomotive speeding towards its doom, we have just one man to irritate us even when the film does it best to keep us on the edge of the seat. That character is the hero itself, Ranveer, played by Mohit Chadda, also one of film's producer and its co-writer too. Amitabh Bachchan Praises Mohit Chadda's 'Flight' Trailer, Sends Best Wishes for the Movie.

Like the leading man, even Ranveer is a man of many questionable talents. He is usually the owner of Aditya Raj Aviations that supplies equipments to leading airlines. But he is also a big Bollywood fanatic who randomly drops mimicry acts and Bollywood quotes, even when the situation doesn't demand like. Like say, just when your company is accused of a plane accident that killed more than 70 people. Chill bro... there is a time and place for lame jokes.

He can also tackle parkour-skilled goons, while talking on his phone to his girlfriend who has run out of toilet-paper. Yes, the film has time for that scene, I kid you not. In short, he aims to be Tony Stark, shares name with Ranveer Singh, mouths Amitabh Bachchan dialogues and acts like Shah Rukh Khan, but bringing the charm of none.

No wonder, his Board of Directors wants him out. Some of them even wanting to bump him off for good, after he threatens to fire the person who bought faulty parts that resulted in the air crash. A couple of them trap him in his own private jet and gets him marooned in the sky with a bomb ticking on board. Why they didn't just shoot him or poison him when they had the chance... No one's the wiser about this!

But hey, Mohit Chadda in himself isn't really a bad actor, only that his character irritates us and the film's other characters to the core, that we pray that the plane to crash fast and end our suffering. Sadly, his jokes stretch beyond the short life of his plane, including one very ill-timed 'chute' joke. The burning plane, however, does offer a couple of thrilling sequences, even if you get a sense of dejavu feeling, especially if you have gorged on films like Executive Decision, Snakes on a Plane and even Dhamaal (you know what I am talking about when you see it)!

The CGI is jiffy in places, the BG score feels like The Flash-meets-Black Widow, and the tension feels as real as the put-on Arabic accent by the actor who plays the ATC controller in Dubai. You cannot deny, though, that this vanity project of Mohit Chadda certainly is ambitious and charts a different path of itself when it comes to usual launchpads. Even it serves the purpose of selling the hero as this metrosexual handsome devil, giving him cool slo-mo shots, fight scenes and shows him flirting with pretty girls while claiming to be a one-woman man.

At least, the premise and the airplase portions makes the second act bearable enough, there is some gripping sense as Ranveer figures a way out to stay alive when things go horribly wrong around him.

That is, until a convoluted third act arrives, where even the remaining little sense of logic goes for a toss. We also have Pavan Malhotra and Zakir Hussain, putting up their grim faces, while imagining the vacations they would get with their huge paychecks that would have come signing this one.

As for ambition, well, we have to admit the confidence of the makers, as they promise a sequel that will arrive in 2023, featuring another Chadda.  Mohit Chadda Weighs in on Nepotism, Says Bollywood Supported Him for 'Flight'.

Flight is thrilling in parts, but the writing and the making take the bolts out of this flight of fancy. Still some real grace marks for its ambition and for a second act that makes it a one-time watch!

(The above story first appeared on LatestLY on Apr 02, 2021 11:00 AM IST. For more news and updates on politics, world, sports, entertainment and lifestyle, log on to our website latestly.com).