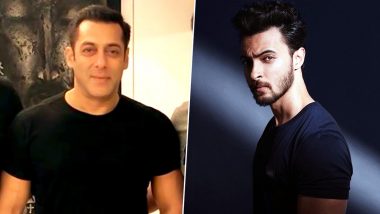 As per a report in Bollywood Hungama, Aayush Sharma has started prepping up for his role in Kabhi Eid Kabhi Diwali. The reading sessions have reportedly started for which Aayush is meeting the film’s producer, Sajid Nadiadwala. However, there has been no official announcement on it yet. If this turns out to be true, then it would Aayush’s second film with Salman Khan. Aayush has reportedly signed a film that is a remake of the Marathi movie, Mulshi Pattern, and Salman Khan is said to be playing an important role in this film. Looks like Salman and Aayush are all set to smash records at the box office! Is Salman Khan’s Movie with Aayush Sharma a Remake of the Marathi Film Mulshi Pattern?

Regarding Salman Khan and Pooja Hegde’s characters in Kabhi Eid Kabhi Diwali, a source had revealed to Mirror, “His lady love is a traditional small-town girl who is the polar opposite of Salman’s character.” The source also stated, “There’s a beautiful mature love story between the two characters, and Pooja’s track acts as the catalyst to the plot.” Stay tuned for further updates!

(The above story first appeared on LatestLY on Mar 10, 2020 11:20 AM IST. For more news and updates on politics, world, sports, entertainment and lifestyle, log on to our website latestly.com).