The makers had planned to shoot the last schedule of Taapsee Pannu, Vikrant Massey and Harshvardhan Rane starrer in Delhi. 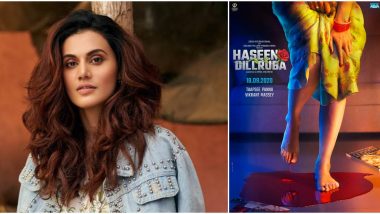 Shooting of several films and other shows across industries had to be suspended owing to the coronavirus outbreak. The makers had to temporarily suspend all the shooting that was planned anywhere in the country or abroad. And in case, if the shooting of a film has been planned for abroad location, the makers will have to wait until the travel ban for overseas is lifted. Now something similar even the team of Haseen Dillruba has to tackle. Haseen Dillruba Poster: Taapsee Pannu-Vikrant Massey to Star in a Murder Mystery; Film to Release on September 18, 2020.

The makers had planned to shoot the last schedule of Taapsee Pannu, Vikrant Massey and Harshvardhan Rane starrer in Delhi. But owing to the rising number of cases across the country and the risk involved in flying down a team to the capital, the makers have had a change of plan. They are now planning to shoot the final schedule of Haseen Dillruba in Mumbai by September. About it, a source revealed to Mid-Day, “Flying down a unit to another city for a shoot is not a feasible idea in the current scenario. So, Vinil and the producers have decided to film the last leg in Mumbai instead. They are making some significant changes to the storyboard to accommodate the location change. The team is hoping to begin the 15-day shoot by September and is currently contemplating erecting an indoor set at a city studio.” Atul Kasbekar, Producer of Taapsee Pannu Starrer Looop Lapeta, to Get COVID-19 Insurance for Movie and Crew.

There is no official update if the team has such plans. Haseen Dillruba, produced under the banner of Colour Yellow Productions, was scheduled for a theatrical release on September 18. But since last leg is yet to be shot and other works are pending to be completed, the makers would mostly have to postpone the release date.

(The above story first appeared on LatestLY on Jul 18, 2020 09:51 AM IST. For more news and updates on politics, world, sports, entertainment and lifestyle, log on to our website latestly.com).