IPL 2020: Virat Kohli Asking Anushka Sharma If She Had Food From The Field Is Winning The Internet

Anushka Sharma and Virat Kohli's video from the RCB Vs MI match last Sunday has been going viral. It has the skipper asking his wife if she had food. 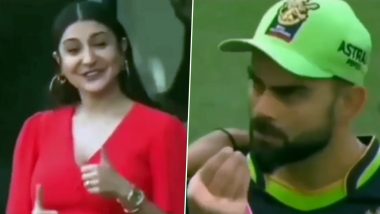 Anushka Sharma and Virat Kohli recently announced that they will be parents soon. This news left everyone slightly surprised because Anushka had managed to conceal her baby bump damn well. She had even appeared for a video interaction along with Kohli a few days before their big reveal. Now the couple is in UAE where Virat is playing at the ongoing IPL. On Sunday, his team Royal Challengers Bangalore took on Mumbai Indians. But there's something else other than the match that caught everyone's attention and now is a viral video. Kohli asks Anushka who was in the stands if she had food. This sweet gesture between the two, while they are many feet apart, has won the internet. Anushka Sharma Flaunts Baby Bump and Wide Grin In Her Fresh Sunkissed Pictures!

They have a little longish chat in gestures and people just couldn't get over it. We have a feeling they knew they would be captured and talked about on social media. Check out the video and do take note of a glowing Anushka and an excited Virat.

Anushka has been sharing some beautiful and gorgeous pictures of her baby bump on Instagram. After Kareena Kapoor Khan, her pregnancy was some of the only good news that we received this year and so, it will always be damn special.

(The above story first appeared on LatestLY on Oct 29, 2020 12:29 PM IST. For more news and updates on politics, world, sports, entertainment and lifestyle, log on to our website latestly.com).