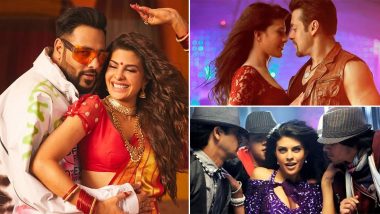 Former model as well as an actress, Jacqueline Fernandez hardly needs any introduction. She made her Bollywood debut with Aladin in 2009 and from there on has been one of the most admired babes in the showbiz. Over the years, Fernandez has worked with many A-listers in B-town. From being a fashionable charmer, nailing in the acting department to even being a fantastic dancer, Jacqueline is a complete package. On August 11, 2020, the actress turns a year older and celebrates her 35th birthday. And so, on this occasion, we thought of listing some her chartbuster songs which are high on energy and ofcourse dance. Jacqueline Fernandez's Bong Avatar Made Us Realize How Hot The Sri Lankan Import Is Even In Her Desi Flavour!

The Sri Lanka beauty is a seductress and whenever she has flashed her moves in any songs, she has been a treat to watch. From her latest track "Genda Phool" to "Jadoo Ki Jhappi", Fernandez dance numbers are irresistible. Be it her expression to even acing the art of dancing, she is a stunner. Check out a few of her dance songs below: Jacqueline Fernandez Enjoys First Lunch of 2020 with Varun Dhawan and His GF Natasha Dalal in Switzerland.

The first one our list is Badshah's song featuring Jacqueline. The actress' Bong avatar and sizzling moves in this one will make your heart skip a beat for sure. Listen and watch to get mesmerised!

Up next, we have Jacqueline's most loved song starring Salman Khan. This one was quite a hit and saw the birthday girl flaunting some smooth moves. The signature step of this track had also become famous. Check it out.

From Race 2, "Lat Lag Gayee" is a hot number which sees Jacqueline along with Saif Ali Khan. The chemistry between the two wherein the actress tries to woo Saif in a skimpy outfit can't be missed.

Jacqueline is seen throwing some desi shade in this one in a pair of ghagra-choli. Her thumkas make "Jadoo Ki Jhappi" from Ramaiya Vastavaiyia an entertaining dance number. Check it out.

That's it, guys! As according to us, the top five songs listed above are Jacqueline's most loved and foot-tapping numbers. Also, one thing to notice here is that Fernandez is not at all repetitive in any of her songs which makes them even more likeable. We wish the actress a happy 35th. Stay tuned!

(The above story first appeared on LatestLY on Aug 11, 2020 12:00 AM IST. For more news and updates on politics, world, sports, entertainment and lifestyle, log on to our website latestly.com).