Her mother Rabia Khan in a recent interaction with Spotboye spoke about the practice of bullying in Bollywood and why it's high time it needs to stop. 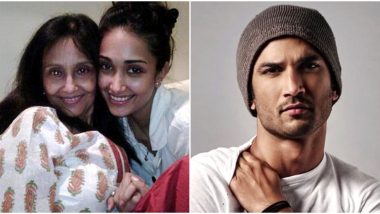 Sushant Singh Rajput's death has sent shockwaves in India. The popular Bollywood actor died by suicide on June 14. Condolences have been pouring in for the actor from the film fraternity as well as his fans. Recently, late actor Jian Khan's mother Rabia Khan condoled his death with a heartfelt message and also spoke about the bullying culture in Bollywood. Rabia lost her own daughter Jiah Khan to suicide back in 2013. Her mother Rabia Khan in a recent interaction with Spotboye spoke about the practice of bullying in Bollywood and why it's high time it needs to stop. Sushant Singh Rajput Death: Case Filed Against Karan Johar, Salman Khan, Sanjay Leela Bhansali, Ekta Kapoor In Muzaffarpur Court.

In her interaction with the portal, Rabia Khan said, "My condolences to Sushant Singh’s family. It is very heartbreaking, it is not a joke. Bollywood has to change, Bollywood has to wake up. Bollywood has to completely demolish bullying. And I have to say bullying is also kind of killing somebody.” While netizens have already been calling out Karan Johar and other bigwigs from the industry on nepotism, Jiah's mother too spoke about standing up against the toxic behaviour as she said, "Stand up; fight, protest and stop this toxic behaviour in Bollywood.”Sushant Singh Rajput Suicide: Mumbai Police Will Investigate Professional Rivalry Angle, Reveals Maharashtra Home Minister Anil Deshmukh.

Jiah Khan passed away in 2013 at the age of 25. Actor Sooraj Pancholi was booked for abetment of suicide (Section 306 of IPC) in the trial. With Sushant's death, the dialogue on nepotism in Bollywood has come to the fore and the industry remains divided on the same.

(The above story first appeared on LatestLY on Jun 17, 2020 01:44 PM IST. For more news and updates on politics, world, sports, entertainment and lifestyle, log on to our website latestly.com).