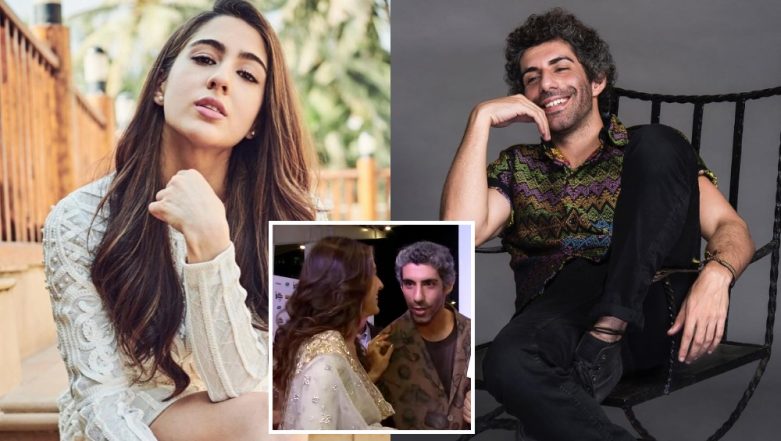 Sara Ali Khan can't just catch a break from the internet talking about her. Because, here we are again absolutely gushing over her. Well, a wee bit more on Jim Sarbh this time. Yes, the most unlikely pair we are going to talk about today is Sara Ali Khan and Jim Sarbh. So, the Kedarnath actress was at the Filmfare Awards 2019 (where she won the Best Debut trophy, BTW) and was talking to Zoom at the red carpet. During the interview, one could spot Jim Sarbh giving another interview right behind Sara. Planets aligned and heavens descended their blessings, and Jim decided to videobomb Sara's interview.

Jim, first of all, gave his best wished to Sara. Then, he proceeded to jokingly say that he looks through her pictures from previous events to pick a colour palette for his own outfits. "Sara is the one person, I'd like to emulate," he quipped. Sara Ali Khan Embarrasses Kartik Aaryan by Screaming Out His Name in Public – Watch Video.

Behold, here is the cutest videobombing in Bollywood ever featuring Sara Ali Khan and Jim Sarbh:

On the work front, Jim is basking in the praises coming his way for the web series, Made in Heaven. The actor was also a part of Sanjay Leela Bhansali's Padmaavat alongside Ranveer Singh and Rajkumar Hirani's Sanju alongside Ranbir Kapoor. The actor has been nominated for his performance in Padmaavat at many award shows.

Sara is busy shooting for her next film. The untitled movie will pair her opposite Kartik Aaryan and is being directed by Imtiaz Ali. Well, Sara and Jim don't look bad together in a single frame. We'd love to see more of them together.