Kangana Ranaut's Manikarnika Teaser to Be Unveiled on August 30? 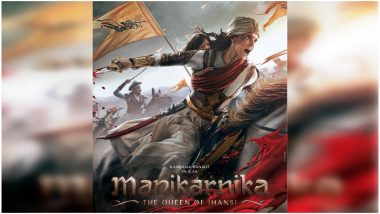 Kangana Ranaut will do her first historical biopic with Manikarnika: The Queen of Jhansi. As the name suggests, the three-time National Award winning actress is playing Rani Laxmibai, the brave Rajput queen who had laid down her life, fighting in the First War of Independence against the British. Manikarnika is directed by the Telugu film-maker Krish, known best for making Gautamiputra Satakarni, a Telugu period film starring Nandamuri Balakrishna.

Manikarnika: The Queen of Jhansi was earlier supposed to come out this year. However, due to its strenuous shooting schedule and Kangana's injury during the shoot, the movie has been pushed to release on January 25, 2019, thereby clashing with Hrithik Roshan's Super 30 and Emraan Hashmi's Cheat India. However, you can get a glimpse of the film very soon. If reports are to be believed, the first teaser of Manikarnika will be out on August 30. Even PVR Cinemas put up a tweet, hinting at this -

So definitely keep your eyes open for what could be Kangana's jab at another National award win. Meanwhile, there has been news that Kangana had directed some portions of the film, when Krish was busy completing his NTR biopic. Her spokesperson confirmed this to Mumbai Mirror, "Yes, there is some patchwork still to be completed and Krish has got busy with the NTR biopic. He is not to be blamed, Manikarnika is a period drama and such movies takes time. Kangana speaks to Krish over the phone almost every day to discuss the filming. He is there in spirit with the team."

So how excited are you about Manikarnika teaser? Share your thoughts in the comments section below.

(The above story first appeared on LatestLY on Aug 29, 2018 11:57 PM IST. For more news and updates on politics, world, sports, entertainment and lifestyle, log on to our website latestly.com).