Script writer KV Vijayendra Prasad wants certain portions of the film to be reshot, here's why! 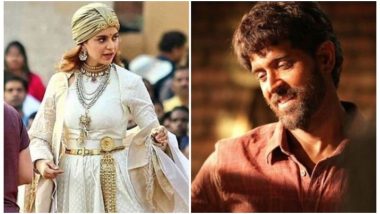 While everyone is waiting with bated breath to see Kangana Ranaut play one of India's most unforgettable historical figures in 'Manikarnika- The Queen of Jhansi', there are chances of Kangana's film  to have a change in its release date. Yes, you read that right. The epic biographical, which was scheduled to hit the silver screen on January 25 next year, may have a new release date as KV Vijayendra Prasad, the one who has penned the script of the film wants certain portions of the film to be reshot. Looks like the film may not clash with Hrithik Roshan's Super 30.

According to a report in DNA, a source informed, "The film was shown to Vijayendra Prasad and he felt some scenes were not working. Other unit members also agreed and hence it has been decided to rework on those crucial scenes." Also, in a statement to Peepingmoon.com, a cast member from the film told that the portions of the ambitious Rani of Jhansi biopic will be reshot in Karjat from the 27th of this month.

However, the report also suggests that the director of the film Krish Jagarlamudi is not likely to reshoot these portions. The source further revealed to the website, "Krish has signed another South film, a biopic on NTR which has a very promising star cast that includes Vidya Balan, Rana Daggubati, Nandamuri Balakrishna and Sumanth among others. This project needs his full attention. Krish doesn’t want to be handling both big projects at the same time and has reportedly told the Manikarnika makers that he will not be available for the reshoot."

On the professional front, Kangana Ranaut, who was last seen in Hansal Mehta's Simran has her plate full, as she will also be seen in Rajkummar Rao starrer Mental Hai Kya. Reportedly, the actress has completed the London schedule of her much-anticipated film Mental Hai Kya. Watch this space for further updates.

(The above story first appeared on LatestLY on Aug 21, 2018 01:46 PM IST. For more news and updates on politics, world, sports, entertainment and lifestyle, log on to our website latestly.com).