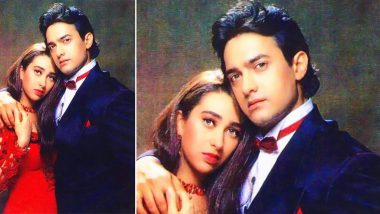 Actress Karisma Kapoor went down memory lane and shared a picture with Aamir Khan from the days of their 1996 superhit, Raja Hindustani. In the still that Karisma posted on Instagram, she is seen posing with Aamir in a red dress. The actor wears a tuxedo. "Guess the film #flashbackfriday #guessinggameon" Karisma captioned the image. When Karisma Kapoor Went Shimmer, Shine, Slay Mode Chic in Balmain!

"Raja Hindustani", directed by Dharmesh Darshan, tells the tale of a smalltown cab driver who falls in love with a rich heiress. The film is loosely based on the 1965 superhit, "Jab Jab Phool Khile" that starred Shashi Kapoor and Nanda. Malaika Arora Recalls the ‘No Mask’ Pre-Lockdown Days, Shares a Throwback of Her Last Outing With Kareena Kapoor Khan, Karisma Kapoor (View Pic)

Karisma was last seen in Ekta Kapoor's digital show "Mentalhood", which explores the multitasking nature of different types of mothers, and their efforts to ensure the best upbringing for their children.

(The above story first appeared on LatestLY on Aug 15, 2020 04:02 PM IST. For more news and updates on politics, world, sports, entertainment and lifestyle, log on to our website latestly.com).