All these Karwa Chauth scenes had something major too add to push the story forward. Check them out here. 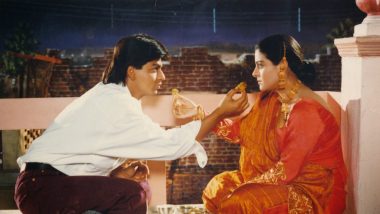 This year Karwa Chauth is celebrated on October 27 and all the women across the nation already seem excited. The festival where the married Hindu women observe fast for a day is celebrated with great pomp. The tradition has not only a special place in real life but also the reel life. Bollywood takes all the festivals too seriously and the filmmakers do not do not leave a this chance to make it look larger than life, musical and colourful than ever. Shah Rukh Khan-Kajol's karwa chauth from DDLJ is extremely famous. But there are more such scenes which showed the festival beautifully. Check them out.

This scene from Kajol and Shah Rukh Khan's film is evergreen. Raj and Simran's eternal lovestory would not be complete without this iconic scene where both the lovebirds secretly fast for each other and celebrate it together on the terrace.

Shahid Kapoor and Amrita Rao's college romance became quite popular. In one of the scenes, Amrita is seen observing a fast for her boyfriend played by Shahid. The scene is also a trigger to the twist to the plot where he convinces her to accompany her to Aliabaug for some 'alone' time.

Amitabh Bachchan and Hema Malini's scene from this emotional film almost brought tears into the hearts of the audience. There love and understanding has been portrayed beautifully in this scene where they break their fast over a phone conversation.

The Karwa Chauth scene between Salman Khan, Sushmita Sen and Karisma Kapoor is rather a funny one. In this scene he is seen cheating on his wife by celebrating the festival with his lover and his wife finds it out. Also, their dog has a special role to play in this important scene! Karwa Chauth Bollywood Songs: Chand Chupa Badal Mein, Ghar Aaja Pardesi and Other Romantic Tracks To Celebrate The Festival.

Certainly, the filmmakers know how to make use of these festivals to add magic to the plot. If you observe these scenes, you will find that the scenes had something major too add to push the story forward. These are some of the most remembered scenes but you can let us know your favourite ones in the comments section below.

(The above story first appeared on LatestLY on Oct 25, 2018 07:54 PM IST. For more news and updates on politics, world, sports, entertainment and lifestyle, log on to our website latestly.com).