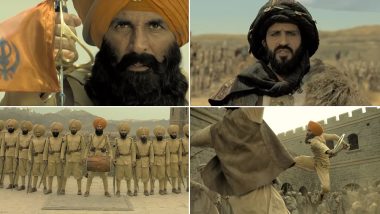 One of the most anticipated films, Kesari is all set to hit the silver screens this month. The trailer released a few weeks back and it left fans wanting for more. And now, the makers have released a new dialogue promo of Akshay Kumar unleashing his brave, courageous side to us! For those who don't know, the story of Kesari is based on how  21 brave Sikh soldiers fought against 10,000 Afghan soldiers to safeguard their land from invasion. Akshay Kumar's Kesari Effect: Nagpur and Jaipur Police Lend A New Spin To 'Chal Jhoota' Catchy Line With These Memes.

Akshay looks convincing as a leader of the Sikh soldiers, who can be seen roaring like lions with weapons in their hands and rage in their eyes. Talking about the challenging part of his role, Akshay had earlier said, “The most challenging part of this role was to fight in unbearable heat in a massive turban, which they wore during those days and make it look real.” Kesari New Poster: Akshay Kumar's Blood-Soaked Sword Gives Us a Glimpse of How Intense the Battle is Going to Be.

Anyway, you can check out the new dialogue promo of Akshay Kumar starrer Kesari here:

From the captivating background, amazing music and action scenes — the teaser and trailer took the audience into the world of the bravest battle ever fought which was the Battle of Saragarhi. Kesari, based on the 1897 Battle of Saragarhi, has Akshay essaying the role of Havildar Ishar Singh. The film, which is directed by Anurag Singh, is all set to hit theatres on March 21, giving fans a perfect Holi gift. The movie also stars Parineeti Chopra which brings together Akshay and Pari for the first time. Apart from Kesari, Akshay will also be seen in Good News and Mission Mangal, while, Parineeti will soon star in Sandeep aur Pinky Faraar and Jabariya Jodi.

(The above story first appeared on LatestLY on Mar 11, 2019 03:34 PM IST. For more news and updates on politics, world, sports, entertainment and lifestyle, log on to our website latestly.com).