While Mimi is all set to release on July 30, Kriti Sanon shot for a few of her upcoming movies when restrictions were eased. So on her big day, let's know a bit more about all the movies that the actress is a part of. 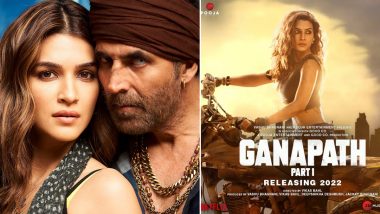 Birthday girl Kriti Sanon has a packed movie calendar for the coming months. If there's Mimi which is slated to stream on Jio Cinema and Netflix from July 30, there are a host of other biggies that the lady has shot for. While her Bachchan Pandey release got stalled due to the pandemic, she shot for a few of her upcoming movies when restrictions were eased. So on her big day, let's know a bit more about all the movies that the actress is a part of.  Mimi: Kriti Sanon Is Obsessed With Ranveer Singh In This Dialogue Promo From The Film (Watch Video)

Also starring Akshay Kumar, BP is a remake of Jigarthanda with Kriti playing the role portrayed by Siddharth in the original. It's a really interesting role that forms a perfect combination for Akshay's Don character. The movie is expected to be the Republic Day release in 2022.

Not much is known about Kriti's character in this film but given the interesting plot of a werewolf central role, this will be quite a ride for sure. Varun Dhawan and Kriti shot for the film in Arunachal Pradesh.

A spin on Ram and Raavan's tale, Adipurush is going to be a huge movie as it is headlined by Prabhas. Kriti Sanon is apparently playing Sita in the film which makes this movie extremely exciting.

Ganpath will see Kriti reunite with her first on-screen hero Tiger Shroff. It is said to be a movie about a wrestler who tides over all hardships to make a mark. Ganpath Part 1: Tiger Shroff Is All About That Swag in the New Teaser Poster (Watch Video)

Kriti Sanon will have yet another reunion with Second Innings as she teams up with Rajkummar Rao. They worked together in Bareilly Ki Barfi earlier. The movie has a unique story of two people who adopt the elderly as parents to end their loneliness.

There's no official announcement about Housefull 5 yet apart from Akshay Kumar hinting at the same during the celebration party of Housefull 4. But rumours suggest it is very much on the cards.

(The above story first appeared on LatestLY on Jul 27, 2021 12:00 AM IST. For more news and updates on politics, world, sports, entertainment and lifestyle, log on to our website latestly.com).