Lata Mangeshkar Birth Anniversary: Did You Know Aaayega Aanewala Made All India Radio to Break Norms and Reveal Singer's Name? Here's Why!

In the 40s, songs were credited to the characters who sang them in a film. So Aaayega aanewala was credited to Kamini, Madhubala's character in Mahal in 1949. But deluge of requests enquiring about the singer, made AIR break norms and reveal her name! 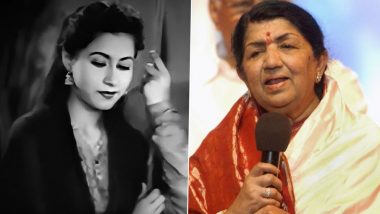 It's quite heartbreaking to realise that we are living in an era where the Queen of Melody has left us forever. This is a void which will never be filled ever! Lata Mangeshkar will always be one of the precious persons to walk on earth and the best thing to happen to Indian music. But the reality is now we neither have the queen nor any melody. Lata Mangeshkar Birth Anniversary: 15 Interesting Facts To Know About India's Queen of Melody .

Lata Mangeshkar has filled every person's life with amorous music and soulful voice. Every song just hits the right chords, always. But then she always had that spark to make people go insane about her vocal skills. Same happened when "Aaayega aanewala" from Mahal was played on radio.

The norm in those days was, we are talking about 1949 here, film songs were attributed to the character who lip syncs  it in the film. So for Mahal, "Aaayega aanewala" was credited to Kamini, the role played by Madhubala in the film. When the song was released and played on radio, AIR got many requests from listeners enquiring about the singer. A Mumbai Mirror article reveals that AIR called up the record company to know if they can reveal Mangeshkar's name on Radio. She became a star just like the leading lady of the film Madhubala! Lata Mangeshkar Birth Anniversary: From Aaja Re Pardesi to Didi Tera Devar Deewana; Here’s a Look at 5 Filmfare Award-Winning Songs by the Music Legend (Watch Videos).

Listen to the haunted melody here:

Lata Mangeshkar changed rules, made people her fans just with her voice. That's why she is considered the Goddess of Melody!

(The above story first appeared on LatestLY on Sep 28, 2022 08:10 AM IST. For more news and updates on politics, world, sports, entertainment and lifestyle, log on to our website latestly.com).