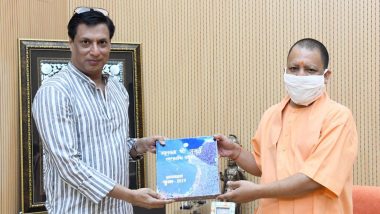 Filmmaker Madhur Bhandarkar on Sunday met Uttar Pradesh Chief Minister Yogi Adityanath at the latter's official residence to discuss the chief minister's announcement about the country's "biggest and most beautiful film city" to be set up in Gautam Buddha Nagar district. The chief minister gifted the filmmaker a coin with Lord Ram's inscription on it, a copy of the Ram Charitramanas, a garland made of basil seeds and a coffee table book on the Kumbh Mela that was held at Prayagraj last year. Madhur Bhandarkar Travels In an Auto Rickshaw (Watch Video)

According to a government spokesman, Bhandarkar congratulated the chief minister for planning a film city and assured full cooperation from the film fraternity. The spokesman said that the meeting assumes significance in the backdrop of the film city announcement. Adityanath has asked officials to identify land suitable for the film city project in NCR. Madhur Bhandarkar Birthday: Dialogues From The Filmmaker’s Movies That Are Unforgettable

"The CM announced to set up the biggest and most beautiful film city of the country in Gautam Budh Nagar district. He instructed officials to search for a suitable plot in or around Noida, Greater Noida or Yamuna Expressway and prepare an action plan to that effect," said a statement issued by the UP government.

Chandra Mohan, secretary of the BJP's UP unit, said that the proposed film city would generate revenue, create jobs and also help showcase the state's rich heritage. "There are vast untapped spots in UP that have pristine natural beauty. Though the project (film city) has been talked about for long, now it has got the much-needed push," he said.

(The above story first appeared on LatestLY on Sep 20, 2020 04:17 PM IST. For more news and updates on politics, world, sports, entertainment and lifestyle, log on to our website latestly.com).