Responding to a tweet posted by Kangana regarding an FIR registered in her name by Javed Akhtar and Maharashtra government, Mika started by asking Kangana who her real target is. He further added that she is a beautiful girl who should just focus on acting and not petty politics. 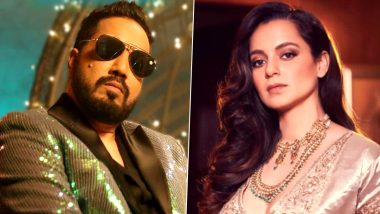 Kangana Ranaut created a stir with her tweets on farmers' protest and the Shaheen Bagh dadi - Bilkis Bano. Little did she know that this would not go well with a larger section of the society and she would be slammed so harshly for it. Amongst the many celebrities who slammed the Queen actress for her tweets was Diljit Dosanjh. The Punjabi actor won many hearts with his bold statements made in response to Kangana's tweet. Now joining the bandwagon is singer Mika Singh who posted a series of tweets, taking a jibe at the actress yet again. Mika Singh Slams Kangana Ranaut For Tweet Shaming Farmer Lady: Shame On You.

Responding to a tweet posted by Kangana regarding an FIR registered in her name by Javed Akhtar and Maharashtra government, Mika started by asking Kangana who her real target is. He further added that she is a beautiful girl who should just focus on acting and not petty politics. He also questioned the reason behind the abrupt urge of nationalism inside her.

He went on inform that he and his team have been feeding 5 lakh needy people every day. He requested Kangana to help him feed 20 people at least because acting fierce on the news and social media is not a big deal. He concluded by saying that he is a big fan of the actress regardless. Farm Bill Protests: Diljit Dosanjh, Mika Singh, Himanshi Khurana Tweet #IStandWithFarmers Extending Support to Farmers Opposing Modi Govt's New Agriculture Reforms.

While we thought Mika is done for good, he posted a few more tweets for Kangana. He asked his fellow "Punjabi brothers' to calm down as their focus is not Kangana. He added that he has no personal issues with the actress but because she made a mistake, she has to face the music. "Even though she hasn’t said sorry she deleted her tweet," added the singer.

I request all my punjabi brothers to please calm down..We are not here to focus on @KanganaTeam I don’t have any personal issues with @KanganaTeam, she made a mistake and faced the reaction. Even though she hasn’t said sorry she deleted her tweet.

He concluded by saying that their intention is to support our farmers and everyone should focus on that. "She is crazy, so let her live her life," said Mika. He went on to say that Kangana can get away when she targets soft people like Karan Johar, Ranveer Singh, Hrithik Roshan and other celebs from Bollywood but not when she targets farmers.

Saada intention hain to support our farmers, so let’s focus there. She is crazy, so let her live her life. Beta @KanganaTeam when target soft people like @karanjohar @RanveerOfficial @iHrithik or other celebs from Bollywood you get away with it but Puttar ji iss taraf mat aao. https://t.co/sWS9WHtTSd

A day earlier, Mika had taken a jibe at Kangana for her tweets on Farmers saying that no matter how much respect he has for the actress, he feels ashamed for what she has done. He tweeted, "I used to have immense respect for @KanganaTeam, I even tweeted in support when her office was demolished. I now think I was wrong, Kangana being a woman you should show the old lady some respect. If you have any etiquette then apologise. Shame on you..." Kangana who is quick to react to such tweets has not yet responded to Mika.

(The above story first appeared on LatestLY on Dec 05, 2020 09:55 AM IST. For more news and updates on politics, world, sports, entertainment and lifestyle, log on to our website latestly.com).