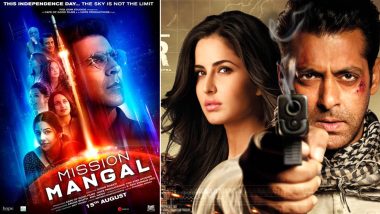 It's so rare and perhaps unnatural to see deserted cinema halls during the Independence Day weekend. The latter is one of the most lucrative holidays to cash in. There are many reasons for that. The biggest one is this is the day, every Indian feels proud of and thus there is a huge patriotic fervor that works in a film's favour. That's why if you notice, the biggest hits during this weekends have mostly been movies which could weave this sentiment in their narratives. The second reason is the fact that it's a public holiday. People like to watch movies in hordes especially if the titles please them. Many movies have seen a tremendous spike on August 15 which eventually helps them to arrive at a big total. The third reason is it always packs the biggest superstars. So you can understand our disappointment to see no releases this time due to the wretched COVID-19 pandemic. Gunjan Saxena: Trying to Boycott Janhvi Kapoor’s Film Over Nepotism? Five Reasons Why You Are Boycotting Your Own Ideologies

But that doesn't mean we can't revel in past glory. On this celebratory day, here come the biggest box office bonanzas that released during Independence Day.

A real-life story about India's journey to Mars created history by becoming the biggest I-day hit ever. Akshay Kumar loves this date and he usually delivers. This time he was more than ably guided by a team of brilliant female actors like Vidya Balan, Taapsee Pannu, Nitya Menon, Kirti Kulhari, Sonakshi Sinha and also Sharman Joshi.

To think that Ek Tha Tiger was the highest-grossing I-day film ever before Mission Mangal came along last year is quite shocking. So many movies have released post that and yet none managed to topple it. Salman Khan and Katrina Kaif's rogue RAW avatars did make people throng the theatres in hordes.

Like we mentioned before, nothing came even close to Ek Tha Tiger's count on I-day for nearly six years. But that doesn't mean we can dismiss the massive earnings of Singham Returns which isn't even as good as the original. It seems Ajay Devgn and Rohit Shetty have a trick to make every sequel to their collabs a bigger hit than its predecessor. Remember the Golmaal series?

Told you I-day is Akshay Kumar's thing. This movie which talks about unhygienic and disastrous outcomes of defecation in the public got great attention from the audience at the theatres.

While the Nanavati murder case has nothing to do with patriotism, Akshay Kumar's Rustom still managed to get a fabulous response at the box office, entering the Rs 100 crore club in just 9 days.

Like we said before, Independence Day holiday has always been kind to Akshay Kumar and the favour was extended to Gold as well. A story of Indian Hockey Team's Gold medal win at the Olympics, the film had just the right mix of characters and actors to become an enchanting story of grit, determination and unity in adversity.

(The above story first appeared on LatestLY on Aug 15, 2020 10:30 AM IST. For more news and updates on politics, world, sports, entertainment and lifestyle, log on to our website latestly.com).