Farhan Akhtar's The Fakir of Venice, which was also supposed to release on January 18, has now been pushed to February. 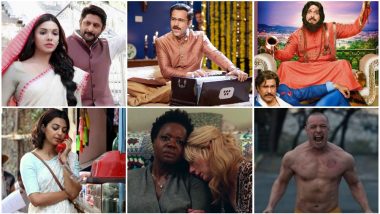 All hardcore movie buffs, be prepared to spend a lot more time in theatres this week. For there are nearly a dozen films coming out this Friday to appease the cinema lover in you! In Bollywood itself, there are four major movies releasing on January 18 (unless some film backs out) and there is going to be one hell of competition over what to watch. Yup, there are some movies that would is hell-bent on attracting bad reviews (looking at you, Rangeela Raja) and there are others who have not been promoted properly (Bombairiya). However, the distribution of screens will definitely eat into each other's business. Rangeela Raja: Govinda and Pahlaj Nihalani's Film Finally Cleared With U/A Rating, Released Pushed To This Date.

The biggest release of them all is Cheat India, which stars Emraan Hashmi in the lead. The movie has been in the news recently for the change in the title to now Why Cheat India, so people would be curious to know what was with the original title that scared Censor Board to get it changed. And there is also the fact that some big Hollywood movies are also coming out this week. Emraan Hashmi’s Cheat India Gets Renamed by Censor Board and Like Us, Twitterati Can’t Help but Ask ‘Why?’

So let's look at all the big players in Hollywood and Bollywood releasing this week, and which of them has the potential to create a storm at the box office (data taken from BookMyShow.com).

Emraan Hashmi's film is based on the malpractices happening in the education system. The movie is directed by Soumik Sen and has former beauty queen Shreya Dhanwanthary make her acting debut. Thanks to the promos that have been well-received by the fans, there is a big chance that Why Cheat India will take off to a flying start.

This sexist comedy is produced by former CBFC chief Pahlaj Nihalani and has Govinda in a double role. Due to release last year, Rangeela Raja faced troubles with the Censor Board over its many misogynistic and sexist jokes. After getting the film cleared from FCAT, Rangeela Raja is finally releasing on January 18. Surprisingly, the makers are not promoting the movie well.

A black comedy about several characters who get into each other's lives over a stolen phone in the city of Mumbai. The movie stars Radhika Apte, Siddhanth Kapoor, Akshay Oberoi, Adil Hussain, and Ravi Kishan, and is directed by Pia Sukanya.

Arshad Warsi plays the lead in the comedy, that is produced by Prakash Jha. The movie is based on a real-life incident and has Warsi play a conman who dupes and marries several women before getting caught. The movie also reunites him with his Jolly LLB co-star Saurabh Shukla.

After the success of Uri: The Surgical Strike, we have another war movie coming out this week in 72 Hours. The movie stars Avinash Dhyani and Mukesh Tiwari, and is based on the life of based on the life of Rifleman Jaswant Singh Rawat who served the Indian regiment during 1962 Sino-Indian War.

On The Basis of Sex

Based on the life of US Supreme Court Justice Ruth Bader Ginsburg, On The Basis of Sex is about how Ruth fought patriarchal values of the Justice system in the '70s to make a name for herself. Directed by Mimi Leder, the movie stars Felicity Jones, Armie Hammer, Justin Theroux, Jack Reynor and Kathy Bates.

A psychological thriller starring Gerard Butler in the lead, The Vanishing is about the mysterious disappearance of three lighthouse keepers in 1900.

Keanu Reeves stars in this science fiction thriller that is about "a neuroscientist who violates the law and scientific principles to bring his family members back to life after they die in a car accident".

Farhan Akhtar's The Fakir of Venice, which was also supposed to release on January 18, has now been pushed to February. We also cannot forget that Uri and Simmba are still successfully running in theatres, so there will be a big tussle for seats.

(The above story first appeared on LatestLY on Jan 15, 2019 10:30 AM IST. For more news and updates on politics, world, sports, entertainment and lifestyle, log on to our website latestly.com).