The announcement of the 66th National Film Awards was held in New Delhi on August 9. The jury members submitted their report to the Information and Broadcasting Minister Prakash Javadekar with their final recommendations in various categories. Check out who won at the prestigious awards this year. 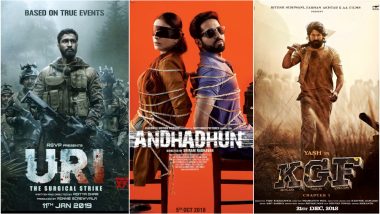 The 66th National Film awards were announced by the head of the Jury for feature films, on Friday, August 9. Awards were presented in 31 categories in the feature film category. A special Award for film friendly state has also been introduced this year and was won by Uttarakhand.

On August 9, the jury members submitted their report to Information and Broadcasting Minister Prakash Javadekar with their final recommendations in various categories for the awards. Prakash Javadekar told PTI, “They made a lot of efforts for the last two months. I am very sure that they would have picked the best films, the best directors. They will announce that at the press conference today. This is 66th year of film awards and they have become a prestigious institute.” This year, the awards were postponed due to the General elections as opposed to the usual setup where the ceremony is held in May. Uri: The Surgical Strike and Village Rockstars Bag Nominations for Best Asian Film Award at AACTA 2019.

Bollywood films Andhadhun, Uri and Badhaai Ho had a massive presence this year as they swept away with some major awards including Best Director, Best Actors and so on. Ayushmann Khurrana and Vicky Kaushal both bagged the Best Actor award for their excellent contribution in Andhadhun and Uri respectively. Actress Keerthy Suresh bagged the Best Actress honour for her film Mahanati. IFFM 2019 Winners List: Shah Rukh Khan Wins an Excellence in Cinema Award, Gully Boy and Andhadhun Bag Other Top Honours.

Best Non-feature Film: Son Rise by Vibha Bakshi and The Secret Life of Frogs by Ajay and Vijay Bedi

Panchenga - In the Land of Poisonous Women

Congratulations to all the winners for this prestigious honour. The date of the presentation of the awards is yet to be decided.

(The above story first appeared on LatestLY on Aug 09, 2019 03:40 PM IST. For more news and updates on politics, world, sports, entertainment and lifestyle, log on to our website latestly.com).