Actress Nushrratt Bharuccha is not a huge horror fan, but has to watch a few in the line of work. She says she has found a technique to help her sleep after catching up on scary movies. 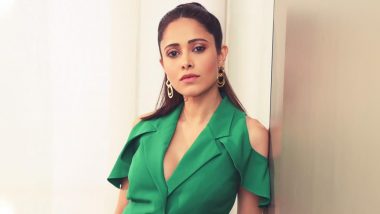 01Actress Nushrratt Bharuccha is not a huge horror fan, but has to watch a few in the line of work. She says she has found a technique to help her sleep after catching up on scary movies. She is set to headline the horror film, "Chhorii", for which the actress seems to be preparing in full swing. "For me watching a horror film is like one of those cheap thrills, which I know I'll not be able to get through, but I still would want to, and go down that road anyway. I cannot watch a horror film fully. I keep hiding behind my shawl, or cover my face with something when some eerie part comes because I just can't see it. But I have to watch it because I need to know how it ends or how the mystery solved. Chhorii: Nushrratt Bharuccha Starts Shooting for Her Upcoming Horror Film in Madhya Pradesh (View Post)

This is very important for me to get out of the theatre in peace," she said. On how she deals with the fear, she shared: "Even after that, I can't sleep alone. When I'm at home, I ask my mom or my friend to sleep with me, or if I'm shooting outdoors, I'd call my hairstylist and ask her to spend the night with me. I'm that scared." Nushrratt Bharuccha’s Deedar De from Chhalaang v/s the Original Song from Dus – Which Track Has Your Vote?

Talking about her preparation, Nushrratt said: "Since I'm doing a horror film now, and I have to watch these, I have found a new technique to help me sleep which is - meditation. I have a three-hour meditation sound track which I play to get me to sleep somehow and just relax. I let it play on loud speaker and then I fall asleep to that. And in case I even wake up within the one hour of its duration, I'll peacefully go back to sleep again." The "Chhalaang" actress will also be seen in "Hurdang". She also has Omung Kumar's "Janhit Mein Jaari" in the pipeline.

(The above story first appeared on LatestLY on Dec 10, 2020 10:01 PM IST. For more news and updates on politics, world, sports, entertainment and lifestyle, log on to our website latestly.com).