If you are expecting a memorable score like Border, Refugee or even LOC-Kargil, then Paltan underwhelms. 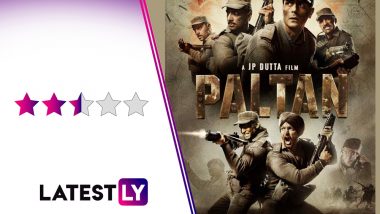 JP Dutta returns to his favourite genre - war dramas - with Paltan. Like his previous movies, Paltan has an ensemble cast led by Jackie Shroff and Arjun Rampal. The movie also stars Sonu Sood, Harshvardhan Rane, Gurmeet Choudhary, Luv Sinha and Siddhant Kapoor. Esha Gupta, Sonal Chauhan, Dipika Kakkar and Monica Gill are the female leads. Like his previous film, Paltan is based on real incidents and is about the  1967 Nathu La and Cho La clashes along the Sikkim border. The movie is all set to release on September 7.

Now JP Dutta's movies are also known for their wonderful music, mostly courtesy composer Anu Malik and lyricist, the great Javed Akhtar. We have heard their magic in the soundtracks of Border, Refugee and LOC Kargil. So what's wrong in expecting the same impact from Paltan? So let's see if the soundtrack of Paltan lives up to out humongous expectations.

Anu Malik is, unfortunately, often accused of plagiarising some of the foreign music in his songs. This accusation rings in our minds when we hear the start of the title track. When the army beats are over, there is a whistling tune that is clearly inspired by Bridge on River Kwai's signature tune. Apart from that niggle, the title track is a rousing anthem that liberally uses 'Vande Mataram' to invoke the patriotic spirit in you. More than Malik's surprisingly average score, it is the energetic singing by Divya Kumar, Irrfan, Adarsh and Khuda Baksh that makes the song worthwhile.

Raat Kitni is a haunting song about soldiers reminiscing about their loved ones back home as the night falls on their army posts. Sonu Nigam's voice is something you always are ready to hear in any song, and Anu Malik utilises his skills here quite nicely. Javed Akhtar's lyrics is another standout. The issue is that we have heard better versions of these songs in JP Dutta's previous films Border (Sandese Aate Hai) and LOC - Kargil (Main Kahin Bhi Rahoon).

Like with any JP Dutta war movie, there has to be a song in the end that pays tribute to the bravery of the fallen soldiers. In Paltan, it is the poignant Main Zinda Hoon. Again, like Raat Kitni, it is the magic of Sonu Nigam's melodious voice and Javed Akhtar's touching lyrics that make the most impact. The lines about the bereaved mothers will surely leave you moist-eyed when played in theatres. Anu Malik's score feels stronger in impact here, compared to the rest of the album.

Here's the jukebox of Paltan for you -

If you are a fan of Sonu Nigam, you would love his work in the soundtrack. But if you are expecting a memorable score like Border, Refugee or even LOC-Kargil, then Paltan underwhelms.

(The above story first appeared on LatestLY on Sep 05, 2018 08:06 PM IST. For more news and updates on politics, world, sports, entertainment and lifestyle, log on to our website latestly.com).