Anurag Kashyap in his recent interaction revealed how Parineeti Chopra had rejected Hasee Toh Phasee with Sushant Singh Rajput because he was a TV actor. 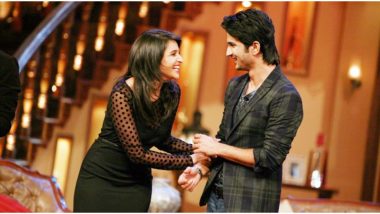 Before Parineeti Chopra starred in Shuddh Desi Romance with Sushant Singh Rajput, she had rejected Hasee Toh Phasee with him simply 'cos he was a TV actor. Anurag Kashyap in his recent interaction with journalist Faye D'Souza revealed how he had approached the PK actor to star in Hasee Toh Phasee but he went ahead and signed a three-film deal with Yash Raj Films instead. He later offered the same project to Sidharth Malhotra and Parineeti was retained as its female lead. Ankita Lokhande Confirms Sushant Singh Rajput Rejected Sanjay Leela Bhansali's Movies.

However, revealing why Parineeti had earlier refused to work with Sushant in the movie, Anurag said, “He was supposed to do the film (Hasee Toh Phasee) and we had to find an actress and we reached out to Parineeti Chopra. She said ‘I don’t want to work with a television actor’. So we explained to her that who Sushant Singh is, he is doing Kai Po Che, he is doing PK and by the time Hasee Toh Phasee comes out, he will not just be a television actor."

The actress who was already on board for Shuddh Desi Romance then must have gone to YRF and suggested Sushant's name for the lead actor. "They (YRF) called him and said ‘Why don’t you come and do Shuddh Desi Romance and not do that film?’ And he disappeared on us," continued Anurag while also explaining how they understood going with YRF was a better deal for the actor. Not Chhichhore, But This Film is Sushant Singh Rajput's Highest Grossing Box-Office Hit.

Anurag also mentioned how the industry had an issue with Sushant ghosting people on multiple projects. "The problem was not that he would misbehave. People who would meet him would say Sushant Singh Rajput is a great boy, who behaves very well, who is sensitive, who is nice. But he would just ghost and disappear," he added.

Besides Hasee Toh Phasee, the director had also offered him Mukkabaaz but the actor never called him back.

(The above story first appeared on LatestLY on Sep 20, 2020 10:18 AM IST. For more news and updates on politics, world, sports, entertainment and lifestyle, log on to our website latestly.com).