Reports suggest Shah Rukh Khan is under quarantine after a crew member on the sets of Pathan tested COVID-19 positive. The film is directed by Siddharth Anand and has John Abraham and Deepika Padukone in the cast as well. The shoot has been halted apparently. 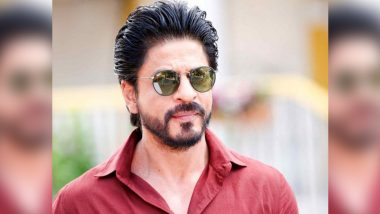 Shah Rukh Khan, John Abraham and Deepika Padukone starrer Pathan's shoot has been halted after a crew member tested COVID-19 positive. As per Pinkvilla, SRK has gone under quarantine for the same. The one who has been infected by the virus is getting quarantined in Andheri.  Only recently John Abraham had joined the shoot of the film. Shah Rukh Khan had shot the majority of the portions in Dubai. Post that, filming was being held in Mumbai. Deepika was supposed to join soon. Shah Rukh Khan and Rajkumar Hirani’s Film Gets Postponed, Actor to Move On to Atlee’s Project After Pathan: Reports

However, a trade source has refuted it all. The source revealed, "YRF works in an extremely efficient bio bubble. Tests happen regularly on sets and all crew members are staying in a hotel. The people transporting them from set to hotel is also tested and put up in hotels. So, if there is anyone who tests positive, it would be before the schedule starts and automatically eliminated from the crew."

The source also adds that given that the lockdown is imminent in Mumbai, Pathan crew had anyway taken a two-day scheduled break so that they can gauge the decision. "It doesn’t make sense to start a new schedule and halt it. So, if there is no lockdown, the film will anyway resume soon. This has been blown out of proportion and is factually extremely inaccurate. It is irresponsible, to say the least, because the industry is doing its best to ensure that work happens by maintaining all norms and regulations.”  Pathan: Deepika Padukone All Set To Join Shah Rukh Khan for the Film’s Shooting Next Week – Reports

Pathan is one of the most anticipated movies of this year and people are waiting for it. Shah Rukh Khan had promised to meet his fans at theatres this year and all hoped it was Pathan. There are reports that SRK's Rajkumar Hirani movie had been postponed and he will move to Atlee's movie next. As long as Shah Rukh is doing movies we are fine.

(The above story first appeared on LatestLY on Apr 13, 2021 04:46 PM IST. For more news and updates on politics, world, sports, entertainment and lifestyle, log on to our website latestly.com).