Pati Patni Aur Woh is a remake of the 1978 film of the same name. Directed by Mudassar Aziz, the film stars Kartik Aaryan, Bhumi Pednekar and Ananya Panday in the lead roles alongside Rajesh Sharma and Aparshakti Khurana in the supporting roles. 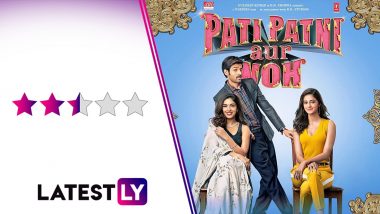 Pati Patni Aur Woh Movie Review: Chintu Tyagi (Kartik Aaryan) has everything defined for him by his parents. Be it his education, his career as a PWD officer or his marriage to the feisty Vedhika (Bhumi Pednekar), all the major decisions are made for him, and Chintu grins and goes along with them. But there is a tipping point for even the simple Tyagi. It starts with his dislike for the food that his working wife makes for him daily. He is also annoyed with Vedhika's insistence on leaving his hometown, Kanpur, for Delhi. After all, he is so adjusted to his place that he never finds any reason to seek a world outside that well. But what if that outside world comes to seek Chintu in his own well? Ananya Panday And Kartik Aaryan Undeterred By Romance Rumours, Actress Says, 'It Has Not Made Any Difference To Our Lives'.

Enters Tapasya (Ananya Panday), interestingly from Delhi herself, who comes to his office for land leasing. In her, Chintu sees an opportunity to be a rebel that he never had been in his life. After all, her name means 'penance' and tapasya ka phal toh meetha hota hai. Tapasya, who is always attired in Western Clothes, makes Chintu wonder why his 'modern' wife never wears them. Her smooth English impresses him. And to make things clear for us, the next scene has Vedhika teach her class with a Lucknowi-accented English.

So despite his BFF Fahim (Aparshakti Khurrana)'s protestations, Chintu tries to get close to her, even lying to her about his wife's fake extra-marital affair. But Chintu himself is clueless as to where he wants to take this relationship ahead, especially when Tapasya responds to his affections.

Chintu Tyagi's reasons for seeking an affair even in a happy marriage could have made for some interesting analysis. But Chintu in himself is not a very likeable character, even when Pati Patni Aur Woh wants us to find him adorable. At one point in the film, I wondered why is it that when a man tries to seek love outside marriage, it is mostly presented humorously. But when a woman does the same, it is always presented in the most serious manner. Even in the case of Pati Patni Aur Woh, I could see seriousness seep in the film, the moment (SPOILERS AHEAD) Vedhika decides to play Chintu's game.

As you might be aware, Pati Patni Aur Woh, directed by Mudassar Aziz, is a remake of the 1978 film by the same name. The original starred the great Sanjeev Kumar, and his womanising antics in the film were fun to watch when I had seen it on television. But that Pati Patni Aur Woh was a relic of its time, and its basic thread has been fodder for many other films like Biwi No 1, Saajan Chale Sasural, Garam Masala and No Entry. To revisit the same themes at a time when the world around wants to be woke, could be an aberration. But if you look purely from its small-town setting and its character drive, it is a story that could happen around us.

Not so relevant are some of the jokes, though, made about marriage and wives. Like that scene involving Chintu and a cop, played by Manu Rishi Chadha, which is played in the trailer too, where the latter wonders why the former loves his wife. Such humour has crossed its expiry date. Those jokes aren't even funny when Kapil Sharma attempts them in his weekly show. Considering, though, that one character in the film is seen watching an episode of The Kapil Sharma Show, perhaps, the director knows who his audience is. And maybe I am not a part of that...

The problem with the new Pati Patni Aur Woh, like its inspiration, is that it doesn't consider emotional cheating as big a deal as a physical one. Even though Chintu gets his just desserts in a very prolonged, often tiresome third act (Aziz borrows some of the elements from his Happy Bhaag Jayegi movies), the movie kinda already forgave him when he doesn't cross the threshold of physical intimacy with Tapasya. Later, Tapasya even tells him that she won't slap him because he wasn't physical with her. Say what? Though I did let go of my annoyance there, because there were some pretty wonderful lines uttered by a couple of characters in that particular sequence.

Which brings me to Pati Patni Aur Patni's biggest strength - the dialogues, written by the director himself, sparkle wit and the actors do a fine job with them. The humour at some of the places works well. Like Vedhika's scenes with her obsessed student Rakesh Yadav (Abhay Kumar), played to the strains of Main Hoon Na's "Tumse Milke Dil Ka Hai Jo Haal", the latter inadvertently also becomes a part of Chintu's romantic mess. An interesting observation - Mudassar Aziz had also directed Dulha Mil Gaya, that starred Sushmita Sen and Shah Rukh Khan, who, of course, were the main leads in Main Hoon Na. Okay, fine, it is a pretty stretched meta-reference, but it worked for me. At least, it was better than the other meta-joke where a waiter tries to take a selfie with Vedhika because she was in 'Toilet'. Geddit?

Returning to the film's humour, it does overlap the movie's flaws to some extent, till a particular point when our patience with Pati Patni Aur Woh begins to percolate away. Especially in the muddled second half, where the movie is confused about whether to be funny or serious.

Look, I am not even going to compare Kartik Aaryan with the inimitable Sanjeev Kumar; it would be a travesty to even do so. However, your liking for Pati Patni Aur Woh actually depends on how much you can bear Kartik Aaryan's gimmicks. The actor continues to use his goofy charm, his trademark set of expressions and ability to rant of breathless monologues to make his Chintu Tyagi appealing enough for his fans. Not even a fake moustache can bring variance in his performance, but if it is drawing peals of laughter from the admirers, who should care? For variance, let's wait for what Imtiaz Ali does with Kartik in Love Aaj Kal 2. Pati Patni Aur Woh: Should Kartik Aaryan Really Be Blamed for Repeating Himself in His Hit Movies? An Opinion!

Bhumi Pednekar, looking quite svelte, delivers the goods as the Patni, doing well in her plucky avatar and as well as when she has to show vulnerability. A vivacious Ananya Panday was one of the rare good things in her debut Student of the Year 2. As the polished but genteel-spirited 'Woh', Ananya proves her debut performance was no flash in the pan, the young actress is charming the second time around too.

As the lead's best friend and conscience-keeper, Aparshakti Khurrana is absolutely terrific in the film and gets away with some of the best lines. More than often, he steals the show from his co-stars.

Sunny Singh in a cameo appears in a character that we are used to watching Jimmy Sheirgill in (the latter providing the narration here). Abhay Kumar, as Vedhika's besotted 19yo admirer, is a fantastic find. The rest of the cast do their parts well.

- Drags After A Point

You may find the new Pati Patni Aur Woh funny, if you can overlook the gheesa-peetha tropes, bear Kartik in his usual goofy avatar, and find the age-old humour in extra-marital dalliances chuckle-worthy. Otherwise, you can either seek out the original or wonder if like the songs, Bollywood cannot think beyond recycling old movies too.

(The above story first appeared on LatestLY on Dec 05, 2019 11:54 PM IST. For more news and updates on politics, world, sports, entertainment and lifestyle, log on to our website latestly.com).