Pati Patni Aur Woh: Should Kartik Aaryan Really Be Blamed for Repeating Himself in His Hit Movies? An Opinion!

Kartik Aaryan has been getting a lot of flak after the trailer of his new film, Pati Patni Aur Woh. The movie, which is a remake of the the 1978 Sanjeev Kumar-starrer by the same name, also stars Bhumi Pednekar and Ananya Panday. 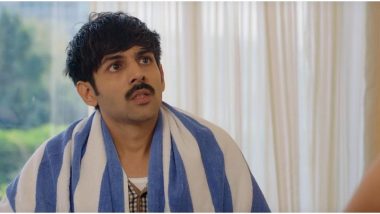 Kartik Aaryan has been getting a lot of flak after the trailer of his new film, Pati Patni Aur Woh. The movie, which is a remake of the the 1978 Sanjeev Kumar-starrer by the same name, also stars Bhumi Pednekar and Ananya Panday. The plot is about a married man who is frustrated with his marriage and he tries to start an affair with a pretty young thing that waltzes into his office one day. So why was the trailer, and more specifically, Kartik Aaryan being slammed? Kartik Aaryan's Pati Patni Aur Woh Trailer Faces Flak for Making a Joke About Marital Rape (Read Tweets).

PPAW's detractors feel that the movie is promoting sexism and misogyny. More so, a dialogue in the film has created a lot of furore. Kartik Aaryan in the promo says, "Biwi se sex maang le toh hum bikhari. Biwi ko sex na de toh hum atyaachari. Aur kisi tarah jugaad lagake usse sex haasil karle na toh balatkari bhi hum hai!" The last line alludes to marital rape and Twitterati is of the opinion that Kartik is insulting the cause of people fighting to get marital rape to get accepted as a punishable crime in the Indian Penal Code.

Okay, I get why people are annoyed with the inherent misogyny and sexism of the film. I am, though, more concerned why the makers would go for a premise that has been rehashed many times in the '90s, most of them starring Govinda. I also have a little issue with why only Kartik Aaryan is being singled out for the blame. Why not the director, Mudassar Aziz, or the writers, get the blame for putting that line there? Pati Patni Aur Woh: Before Kartik Aaryan’s Marital Rape Joke Got Slammed, These Films of Akshay Kumar, Aamir Khan, Ajay Devgn Made Similar Jokes and Got Away With It.

There is an argument that Kartik Aaryan should have refused to star in such movies, and be in more responsible cinema. In a perfect world, that is a very valid argument. But hello, this is Bollywood, where being politically right can only win you followers and likes on Twitter. This is an era where a Housefull 4, considered as a very sexist comedy, that has the audacity to make a joke out of rape accusation, is working well at the box office. So how can you accuse Kartik Aaryan of not being formulaic when it is the formula that works in the industry?

Let's look at the actor's filmography to address this. Kartik Aaryan made his acting debut with the 2011 film, Pyaar Ka Punchnama, a sexist comedy that also marked the directorial debut of Luv Ranjan. At that time, social media wasn't very strong so the accusations of misogyny against the film were milder. Pyaar Ka Punchnama worked decently at the box office. Kartik Aaryan also got noticed for his monologue scene that is seen as woman-bashing by the film's detractors.

Here's where things get interesting. Kartik Aaryan's next film, Aakash Vaani, was again with Luv Rajan and his PKP leading lady, Nushrat Bharucha. Quite an underrated romantic film, Aakash Vaani was the opposite of Pyaar Ka Punchnama both in terms of its tone and premise. The movie dealt with themes of marital rape, that, ironically, became fodder for a joke in Pati Patni Aur Woh. But it was handled in a sensitive manner, where Kartik played a supporting friend to his ex-lover who motivates her to stand up to her abusive husband. Unfortunately, Aakash Vaani flopped at the box office and flew under the radar for most of the film buffs. Pati Patni Aur Woh: Did You Know Kartik Aaryan Had Starred In a Film That Sensitively Dealt With 'Marital Rape'?

Kartik's next film as a male lead was Subhash Ghai's Kaanchi, that also failed at the box office. While the movie was really shoddy, save for Rishi Kapoor's performance, Kartik's character didn't have that misogynistic flair in him that he is known to be playing these days.

When the industry was about to forget the actor, Kartik Aaryan returned with a bang in the 2015 film Pyaar Ka Punchnama 2. The movie was a rehash of the first film, and had a similar monologue scene from Kartik, but became a bigger hit at the box office.

With his career getting a fresh lease, Kartik tried to remain in the genre of comedy, but his next film, Guest Iin London, tanked at the box office and became a setback in his career.

Then in 2018 came Sonu Ke Titu Ki Sweety, directed by Luv Ranjan, which retained the sexism of the PKP series, and turned out to be the biggest hit in Kartik Aaryan's career, earning more than Rs 100 crore at the box office. The movie cemented Kartik's star status and made him a hot commodity (no less helped by rumours of dating Sara Ali Khan). Kartik's last release, Luka Chuppi, where he was also accused of playing the same kind of roles in his more successful films, also was a hit.

So when the formula is working for the actor, who can blame him for not wanting to veer away from it? Superstars like Salman Khan has been playing with the formula for years. Tiger Shroff is known to do only actioners, that work in his favour. In the last five years or so, most of the masala films are the ones that had the higher success ratio at the box office, and they aren't very apolitical. Varun Dhawan's October, considered by many as his best film, only did a mere fraction of the business that Judwaa 2 did. Even Ayushmann Khurrana, who was once hailed for doing different kinds of roles, is now facing accusations of having a formula.

Kartik is still in the nascent stages of stardom, he doesn't really belong to a filmy family that he can get films even if he is down and out. The actor has seen the fact that he was almost ignored when he chose to do films that weren't what the audiences loved him in the PKP space. So it all boils down to what the viewers want to see him or not, and no amount of Twitter outrage can change. Again, see the collections of Housefull 4 to understand what I mean. After all, janta hi toh janardhan hai, and actors like Kartik need their acceptance to sustain in this nepotistic Bollywood.

(The above story first appeared on LatestLY on Nov 05, 2019 10:04 PM IST. For more news and updates on politics, world, sports, entertainment and lifestyle, log on to our website latestly.com).